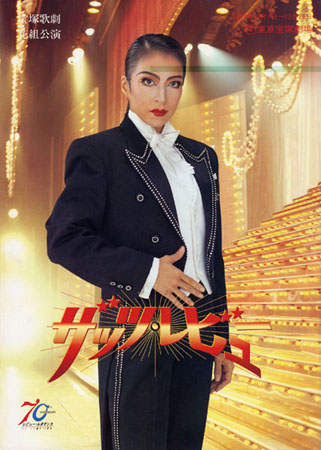 In the prologue of "Mon Paris", which came back to our world with a gorgeous dance and a powerful, breathtaking spectacle show, crowds in the parade gradually change to good-old modern boys and girls in the latter part of 1920s.

The scene shifts to Tokyo, 1928. Harukaze Taihei comes all the way from northern part of Japan to Tokyo with a dream to be in a revue, a new style of theater. He happens to meet a pickpocket, Genji, at Ueno Park. Taihei has a dream to join Takarazuka Revue Company to sing and dance, but Genji's telling him that Takarazuka only accepts female performers disappoints him. Genji thinks about making a game of him but he feels sympathy for this nice man and introduces him to a job at a revue house in Asakusa.

Six months later, at the theater house, Shotenza in Asakusa, spring 1929. The theater is about to switch to a revue house from Kabuki theater due to its financial difficulties. Dancers for the revue such as Sen are busy practicing for the show. And here comes the star dancer of Shotenza, Segawa Botan, a head of sceneshifters, Hanakawado Rokusuke, and an actor Arashi Umenosukei. All cling to Kabuki, and are opposed to Sen and her friends. Ogawara Ryo and Taihei try to persuade Rokusuke and his colleagues, but they' re too conservative to listen to them.

One day Denroku and his fellows from Hashibagumi (they are all pickpockets) take Genji to Shoten Temple on Matsuchi mountain. They are accusing him of stealing the territory. Sen told Taihei and Rokusuke the news and they went immediately to the temple to rescue him. Taihei gets hit hard on his head and passes out. Since the incident Rokusuke thinks better of Taihei and Sen falls in love with Taihei.

December 1930. Shotenza fails in switching to revue and goes back to Kabuki. Sen and other dancers decide to work at a new theater introduced by Ryo. Sen leaves Taihei without telling him her feelings. Meanwhile a servant Matsukata Gonnoshin and Ryo's sister Hanayo come to take Ryo back home. He is the first son of Ogawara family, one of the nobles. Ryo left home opposing to his father who regarded a revue writer as a low-class occupation.

Though Shotenza's attempt to switch to a revue house was not successful, he never gives up on his dream to be a revue writer and has already made up his mind to start it all over again. The situation is same for Taihei. His nurse Tami comes to see Taihei from his hometown, Kakunodate. Soon after they receive a call from Takarazuka Revue Company telling them to come to an interview as their scripts have survived for the last stage of the selection.

New Year 1931. Taihei and Ryo come to Takarazuka City. Genji, Sen, Gonnosuke and Tami accompanied them. Taihei left the hotel earlier for a walk but does not show up to the Geihou Bridge where he is supposed to meet everyone. Ryo is worried about him but his friends persuade him to hurry to the Revue Company. Everyone becomes very anxious about him. Finally Sen finds Taihei hiding behind the bridge girder. He wants to give up the interview for Ryo. Genji and his friends urge him to go immediately to the interview but Taihei confesses that his eyesight has been failing rapidly since the fight at Shoten Temple.

In the beginning of the act long-run revue numbers such as "Parisette" and "Bouquet d' Amour" come to life at the stage of Takarazuka.

Summer 1933. Taihei works at the construction site of Takarazuka Theater in Tokyo. Tami has been anxious about Taihei. He tells her that he is all happy helping build the theater for Takarazuka, because it was his dream. Genji is no longer a pickpocket. He works hard with Taihei. Genji asks Taihei to set up with Sen whom he has been in love with. Taihei willingly takes it because he has not realized her love. Taihei calls Sen to tell her how Genji feels about her but she gets upset with Taihei who does not understand her feelings and runs off. He finally realizes that she is in love with him.

In the mean time, Ryo joins Takarazuka Revue Company and is supposed to come to Tokyo as a staff member of a show in Tokyo. However, Ryo is not fully happy. He is still concerned about Taihei. He has lost contact with him since the day he went to the interview at Takarazuka.

Meanwhile, Taihei and Genji get down to finishing work on a scaffold at the building site of the theater. Suddenly they see Denroku and his fellows from Hashibagumi. They are not pleased with Genji's decision to leave the group. They abruptly attack Genji and he slips off. Taihei, who tries to rescue Genji, falls off from the scaffold. His injuries are not serious and do not endanger his life, but he goes back to his hometown. Left alone, Sen longs for him.

December 1933. Tokyo Takarazuka Theater is finally completed and will be open the day after tomorrow. Everyone is impressed with his work. Genji's sister Tsutaji cares a lot about Taihei. She and Genji are anxious about him because he went home and never comes back to them. Actually Taihei has come back. Accompanied by Tami he appears with a stick in front of the theater. He wanted to forget about the theater but Tami urged him to come to see it. Tami sheds tears in her chagrin over Taihei's unhappiness, but he is proud of his work he did for the construction and says that Ryo too, will do the best for him.

He comes near to the theatre. Sen shows up. Taihei approaches to Sen who tries to ignore him and walk away. "I did know you loved me, but I wasn't sure if I could make you happy." He says good-bye to her and walks past. Sen sings to him. He tries to give up the attachment to her but her strong love moves him. Finally they start to walk together.