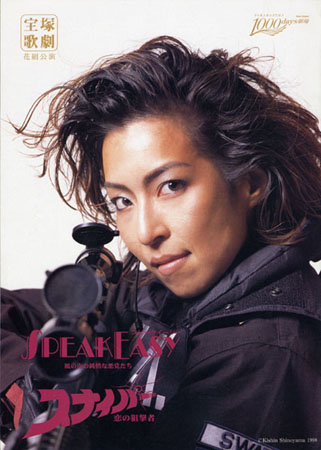 The setting is Chicago during the Prohibition Era. Macheath, or "Mack the Knife", the king of the underworld, has been accused of a countless number of crimes and is waiting for his execution the next day. In his prison cell, he begins to tell Randy, a writer of musicals, the true story of "Mack the Knife".

The story begins with his first encounter with Polly. At the pep rally for the Chief of Police Larry Rockit, who will be running for Governor of the state of Illinois, Macheath falls in love at first sight with Polly, who is attending with her mother Celia. Macheath acts immediately. He tells Polly, "You'll be my wife by tomorrow." At first she is stunned by his audacity, but although she is the daughter of a swindler, it does not take much time for her to become a captive of Macheath's love.

Jonathan Peachum, the boss of the Chicago Swindler Cooperative Society, is shocked to learn that the man his daughter has fallen for is the atrocious "Mack the Knife". Jonathan's principle is to use artistic means to make money, and he despises Macheath, who resorts to violence. But Polly goes so far as to marry Macheath without permission. Jonathan, furious, comes up with a way to tear Polly and Macheath apart and also make some money, i.e. to send Macheath to his death. He puts his plans to action with his wife Celia and the members of the Society.

Polly points out that it would be impossible to arrest Macheath because he and the Chief of Police Rockit are war buddies, and all evidence of Macheath's crimes has been eliminated from the Chicago Police. But Jonathan, with his pride as the boss of swindlers, storms that he will start a full-scale war between the gang and swindlers, dragging in the Police as well. First, Jonathan threatens Rockit, saying that he will interfere with the election by gathering every swindler in Chicago. Rockit, who is no longer able to protect Macheath, warns Polly that Macheath should hide somewhere for a while.

Macheath, who is cornered, entrusts his business to Polly during his absence and disappears. Meanwhile, Celia Peachum visits Macheath's mistress Jenny and asks for her assistance. She tells Jenny to call the police immediately if Macheath appears. Macheath, who comes to the Speakeasy (underground pub) where Jenny works as usual, is sold by her and is captured by the police. Jenny has become tired of his freewheeling love.

Wealth speaks in prison as well. Macheath's prison life is free from worldly cares. Then Lucy, Rockit's daughter, comes to see him. She was also Macheath's mistress. She is furious about his marriage to Polly and while he is calming her, Polly appears. But he manages to bear out the battle between the two women in silence. Polly leaves in tears. Macheath uses Lucy and talks her into getting him the key to the cell from the guard, and easily makes his escape. He does not go to Polly, but to his wife in Chinatown, Little Suzie Lee. When Jonathan hears of this, he immediately sets Rockit to the task and drags Macheath back to prison.

The day of the execution arrives. A crowd has gathered in front of the prison to witness the end of "Mack the Knife". Macheath steps forward to receive his sentence, after giving a few words according to his aesthetics. People call out his name repeatedly. Amid their chanting, he comes back. "Now you all know," Macheath says, "that we can find compassion in dramas rather than in the law. I'll stick to my way of doing things to the very end no matter what."

Everyone is elated, and the story ends happily, and leads to a merry finale.

There is an arch made of lights in the shape of a rifle onstage. Sniper 1 (Male) appears from within a set in the shape of a scope. When he fires a machine gun at random, dancers appear. With the Female Snipers, they all sing and dance sharply to the theme song.

This section is a short revue of the life story of a figure called Harimao, also known as the "Tiger of Malai", who although a Japanese played an important part in Southeast Asia's gaining of independence after the Second World War.

After Harimao's song, the curtain opens to show a set of the jungle of Southeast Asia (Malaysia). The women of the village sing and dance. Suddenly, drunken soldiers of the occupation army appear and attempt to kidnap Village Woman 1. Then, Harimao appears with his men, who are good thieves, and saves the woman and the village. The battle dance.

Gigolo 1 in a tuxedo appears, and sings, "Life is a gamble / By the way, why do all the woman fall for me?" The set changes into a casino, and he finds himself being seduced by the girlfriend of the boss of the mafia. So he fights it out with the boss at the slot machine. Gigolo 1 wins brilliantly. This is a fun scene like a musical, with appearances by the spirit of coins and other such figures.

The Wright Brothers and children sing "Dreaming of the Vast Sky". A scene with ballet-like dance and a chorus.

The central part of the show, with the airport as the stage. Maintenance men, pilots and pursers appear and sing and dance about the yearning for sky travel. Travellers join in. This is the airport in Rio. When the women wearing outfits for the Carnival in Rio appear to welcome the travellers, the music changes to a Latin beat and everyone begins to dance.

A show-scene in the form of a comedy, featuring celebrities and the paparazzi and reporters who pursue them. Kelly, a famous actress, and Michael, a star, secretly go to a restaurant together but are discovered, and the restaurant is thrown into a commotion. Reporters gather and an impromptu press conference is held. Michael becomes furious, and attempts to escape with Kelly.

In the ghetto area where the Jewish people were forced to live, a wedding is being held. Although the people are discriminated against and are poor, they feel a momentary happiness. Then, the Gestapo and the German soldiers appear, and the Jewish people are placed in a freight car. The lovers are torn apart despite their strong resistance.

The scene is in the image of heaven. The spirits of the lovers are united forever in the heavens.

A modern and extravagant finale. In the end, an overwhelming parade by all members is featured.