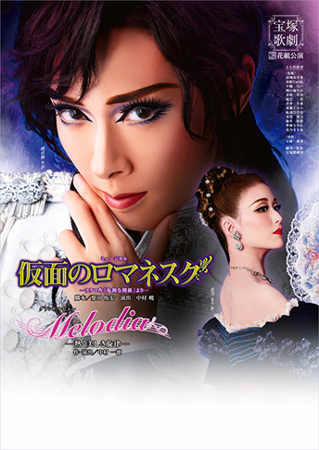 
WARNING!! MAY CONTAIN SPOILERS!!
(Original English language program summary from 1997, with minor edits)
Musical
Romanesque Mask
from the novel Les Liaisons Dangereuses by Laclos
Paris, 1830. After the fall of Napoleon, Imperial Rule is restored by Charles X, younger brother of Louis XVI who was guillotined during the French Revolution. The aristocrats are somewhat fearful of the changing status quo, but nonetheless continue to live in luxury. In this social circle of truth and deception, much attention is gathered on one particular young noble, the Viscount Valmont. The Viscount family was ruined, but using his talent and charisma, he plans to make his house powerful once more.


Melodia
This performance comprises a number of musical pieces played to passionate as well as beautiful melodies and rhythms that generate excitement. They all are part of passionate and beautiful tunes that brim with love, dreams, hopes, passion, sorrow and an energy that knows no bounds.

The revue weaves together the charm of the Flower Troupe, led by Asumi Rio who brims over with brilliance and youth, through lively songs and dancing. As a 2016 National Tour performance, a new melody will sound.