Loading...
Higher than the Sky of Paris / Fancy Dance 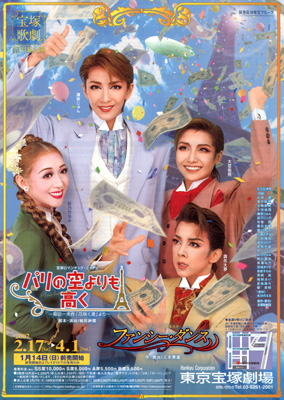 Higher than the Sky of Paris:

Higher than the Sky of Paris

A fresh and light romantic comedy based on the motif of Kikuta Kazuo's Hana Saku Minato.

In 1886, in Paris, Eléonore, the owner of the historic Hôtel St Michel, is very busy from very early in the morning making arrangements to welcome a special guest. Senator Leonid Mangebois and General Dominique Paticov, whom Eléonore asked to come to see her, arrive at the hotel. As soon as they demand of her an explanation for her calling them, she shows them a telegram. Armand Jacquet wired her that he was coming to the hotel that day. Armand is the son of the late Julien Jacquet who organized everything and made a great success of the second Universal Exposition at Paris twenty odd years ago. The president of Bank of Paris Albert de Saint-Loup and Gérard Lolbon arrive at the hotel since Eléonore had called them as well. Gérard, the son of the Lolbon family that owns the Lolbon financial group, says that Julien Jacquet had helped his father very much. The others including Eléonore also owed in fact a great deal to Julien Jacquet who stayed in the hotel those days. All of them are loud in their praise of his greatness and look forward to seeing his son each giving full scope of his imagination about him. Armand arrives at last, and Eléonore and the four gentlemen heartily welcome him. Armand tells them that his father used to talk about them. At that moment, a man comes in and presents himself as Armand Jacquet. Armand immediately introduces the man as his younger brother Georges to Eléonore and her friends who seem quite puzzled. Armand explains that they have come to the hotel separately because of a mutual misunderstanding. However, Eléonore and her friends are not totally convinced by his explanation.

Armand goes up into his room with Georges. Armand violently rebukes Georges for crossing his plans all the time by following him. In fact, Armand is a swindler, and Georges is his younger buddy. Armand has come to Paris after hearing the story of Georges' father, Julien. Armand thought that he could make a pile of money on the occasion of the universal exposition to be held in 3 years by exploiting the old story Julien used to tell Georges. Georges is furious at Armand who seems likely to keep such a rare trick of a swindle to himself. An architect named Gustav Eiffel rushes into the room as Armand and Georges hear Eléonore suddenly shouting. She accepted in spite of herself the architect's words that he would make something which could be a special feature of the universal exposition. However, as he had not paid the room charges for three months, she was trying to get him out of the hotel. Gustav tells Armand and Georges his dream of building the tallest tower in the world, one that would rise high into the sky of Paris. A lot of money was needed in order to make his dream come true. Armand hits upon the idea of making a pile of money from Gustav's dream. He decides to promote the construction of the tower using the hotel as headquarters while swindling the collected funds.

The project of building the tallest tower in the world in Paris becomes much talked about. Mimi, a Parisian flower girl, is thankful to Armand for his helping Gustav. She supports Gustav's dream from the beginning. She admiringly stares at Armand who looks resolute to achieve the project.

The construction is well in progress. One evening, Armand and Georges decide to run away with the funds. However, just before slipping away from the hotel, Armand encounters Eléonore, who deceives herself that he is working late in the night. She kindly tells him that he must take care of his health and wishes him to become a great man like his father, leaving him alone. It is not long before that Mimi comes into the hotel in order to see Armand. She hands him a sum of money she is able to spare and asks him to use it for the construction of the tower however little it is. He is much moved by the trust Eléonore and Mimi have in him.

At midnight in the autumn of 1888, a storm bears down upon the tower, where construction so far is making fair progress. Gustav rushes to the construction site in fear of damage to the almost completed tower. Armand and Georges decide to take this chance to run away. However, the violent storm prevent them from going far, making them return to the hotel. Armand says that they cannot run away in such a storm, while Georges complains that the money they can take away becomes less if they stay longer as the construction is nearing the end. Leonid arrives and tells them that the tower is in danger of falling down due to the strong winds. He says that the tower is filled with the dreams and hopes of many people. Leonid hurries to the tower, as he cannot let the tower fall down. Mimi comes despite the wind. She tells Armand that the tower badly needs as many people as possible in order to keep it standing against the storm. Armand makes up his mind and goes out hand in hand with Mimi in the storm.

A revue show focusing on dance, with a mottif of famous ballets.

Scene 5-7: I Wanna Dance A-C
As soon as a spotlight shines on Champ, he dances and executes his performances.

Scene 8-10: Tango Noir ~ From Petrushka ~ A-C
On the night of the carnival, children gather around a gypsy puppeteer. The puppet show begins.

Scenes 11-13: Last Dance ~ From Orpheus ~ A-C
The streets run with a good old four-beat music at twilight. A man sings a now forgotten melody, which a woman he lost used to sing.

Scenes 14-18: Dance with Me! A-F
Way back in the 1930s, the super-star Frank dashingly comes out of the front entrance of a movie theater. Nancy, who is still a young girl, draws close to the star she adores.

Scenes 22-24: Finale ~ On the melody ~ A-F
All the performers parade gorgeously.