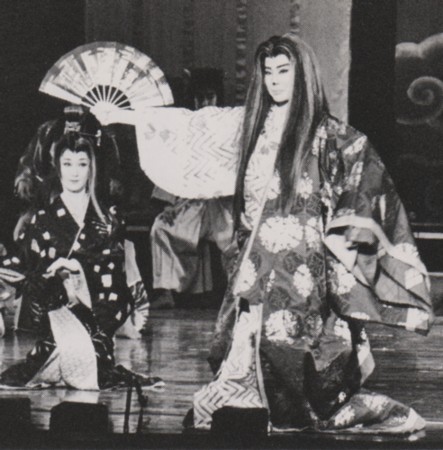 (Original English summary from the program is left unchanged except for a minor spelling correction and truncation of the ending.)

This drama is the story of Ibaragidoji who is a well-known Oni or devil in Kabuki tales.

This devil who appears as the villain in Japanese folk tales and legends is 8 feet in height, has a set of horns on his head, sharp tiger-like fangs and a fierce, ruddy face.

In the 990s a group of Oni attack Kyoto from their stronghold on Mount Ōeyama. Shutendoji, the ring leader of the band, robs the houses of Kyoto of food and clothing. The young women fall prey to the Oni bandits.

It is said that two hundred years before the Oni were foreigners from the north who resorted to banditry because they were persecuted by the Japanese people.

The Emperor Ichijo orders his commander, Minamoto-no-Raiko, to capture the Oni and put an end to their raids.

Watanabe-no-Tsuna, one of Raiko's retainers plans to do some advance scouting of the Oni fort on Mount Ōeyama. His maid servant, Fujinoha decides to follow him in order to meet her lover who is none other than Ibarakidoji, Shutendoji's son.

Fifteen years before, Ibaragidoji had been deserted in early infancy by his father and had been brought up by the feudal Lord of Kii Province.

Ibarakidoji fell in love with Fujinoha, the lord's daughter. However at the age of fifteen he was returned to Mount Ōeyama where he was trained as a bandit by his father.

Misfortunes never come alone — especially for young lovers and shortly after they were parted Fujinoha lost her parents in a fire.

On the first night as Tsuna and Fujinoha climb the mountain they are captured by a band of Oni.

Ibaragidoji is astonished to see Fujinoha again after so long, and his heart is full of memories of their time together.

During a banquet Fujinoha secretly pours a sleeping drought into the Oni's sake. When all of the Oni have fallen asleep, Raiko and his retainers rush the fort...