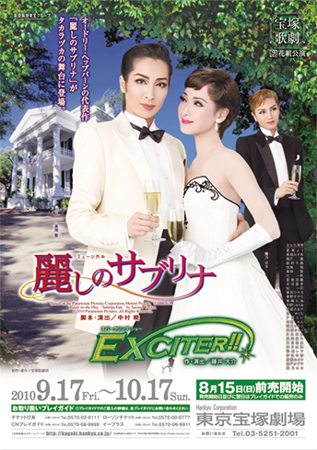 The setting is Long Island, an exclusive residential district in suburban New York. The wealthy Larrabee family has two sons. The eldest is Linus, a serious type who lives for his work. His brother, David, by contrast, is a born playboy. Sabrina, whose father has been employed as a chauffeur by the Larrabee family,
has had a crush on David since she was a child. Yet he pays her no attention. As a way of putting an end to her infatuation â€• which, after all, is directed at someone of a different social station â€• Sabrina's father sends her off to Paris to study. On the evening before her scheduled departure, in great despair, she attempts suicide in a garage on the premises of the residence. Coming to her rescue is Linus, who happens to have come by to pick up his car. Thanks to his unexpected appearance, Sabrina never follows through with the ultimate act. She heads off to Paris.

Two years pass. Sabrina returns home from Paris, having been transformed into a sophisticated lady.
Getting one look at her, David is captivated. Regardless of the fact that his parents have arranged an imminent marriage strategically aimed at expanding the Larrabee family business, he informs them of his love for Sabrina. They respond by giving him a harsh rebuke. David intends to act against their objections,
and in a moment of indiscretion injures himself with a broken piece of champagne glass. He needs some time for peace and quiet. While his injury heals, the elder brother takes his place at the side of Sabrina.
Linus, whose mind is occupied by the fortunes of the family business, entertains a secret plan of driving a wedge between Sabrina and his younger brother.

Linus manages to find time in his busy work schedule to take Sabrina to plays and dinners. Sabrina starts to fall for Linus, as she comes to appreciate his unassuming personality. Linus, for his part, becomes increasingly serious toward the innocent and charming Sabrina, growing strongly attracted to her.

A show that stimulates, enthuses and excites, Exciter continues to give today's world some love and a few dreams. "The revolution of sound, the revolution of beauty, the revolution of man." This is a contemporary production composed of choice scenes and packed with energy. The troupe received high acclaim when it staged the show in 2009. Now a more highly evolved Flower Troupe is back with Exciter.