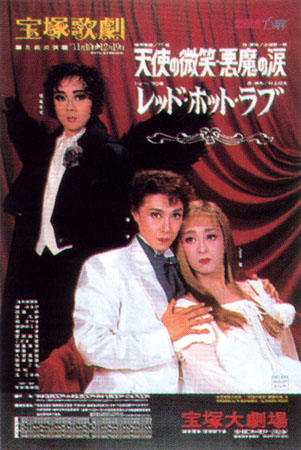 This musical play is based on the first act of Goethe's Faust, with some modifications.

It opens in heaven, where Mephistopheles becomes discontent and pulls off the angel Angelique's wing. The punishment for harming another angel is to be sent down from heaven and become a devil, Raphael tells him. He can return if he saves a human. Mephisto becomes bitter, saying that humans are rotten to the core. He leaves heaven.

Meanwhile, at a university in Vienna, Professor Faust is given a medal for his service and retires. He gives a final lecture, which no one listens to, as they are too busy mocking the old man. Only one person listens, Margaret.

Faust returns home, completely discontent with his life. Mephisto appears and offers him a deal of eternal youth. All he has to do is sign a contract in blood. Then the fallen angel takes the youthful Faust out drinking, where they meet Fritz, Margaret's brother. Faust takes on a new last name and Mephisto gives him everything he needs, from a noble title to the ability to dance.

Later, Faust meets Margaret, telling her he saw her at the university talk and had to meet her. The two eventually fall in love. Mephisto gives Faust a potion to substitute with Margaret's grandmother's usual sleeping potion. Margaret gives it to her grandmother, and the two enjoy a night all to themselves. The next day Faust goes to a party expecting to meet Margaret. Instead, the hostess's daughter makes distasteful bold advances on him. He eventually learns that Margaret's grandmother is unwell and leaves to visit them.

Meanwhile, Mephisto has bribed Fritz's lover Marthe with a ring to break up cruelly with the young man. Frustrated and angry, Fritz returns home to find Faust (whom he already dislikes) there with his sister. He tells his sister about the girl at the party. Then the doctor arrives and tells them that Margaret's grandmother has been poisoned and won't survive. Margaret realizes the sleeping potion Faust gave her was actually a poison and admits it. Fritz challenges Faust to a sword dual. Mephisto blinds Fritz at a critical moment, and Faust kills Fritz.

Faust leaves, angsting and ragging against Mephisto. When he regains consciousness he's in a bordello. He sees a completely broken-down Marthe there, and through her drugged haze she tells him that Margaret has gone insane and is now in a mental hospital.

Faust goes to visit her, and just as he suceeds in bringing her back to reality, Mephisto appears and reclaims the girl. Faust bargains with him: He will go to hell if Mephisto will release Margaret. Mephisto agrees, and Faust is returned to his true age. But Margaret stands by his side, still loving him, and Mephisto's contract is broken by their true love. Ironically, though thwarted, this means that Mephisto has actually saved Faust from his misogynistic, bitter existence, so Mephisto gets to return to heaven.