Loading...
Love Blooms Out on the Murasakino / The Revue 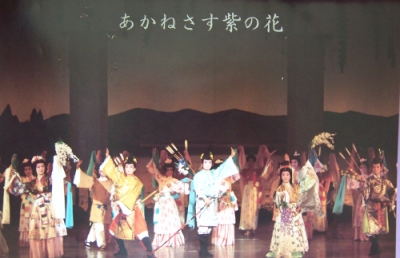 (Original summaries from the show program)


Love Blooms Out on the Murasakino

In the Yamato era, there were two noblemen, Nakanooe-no-Miko, who became the Emperor Tenichi, and Oama-noMiko who became the Emperor Tenmu, and a noble-woman Nukata-no-Okimi. These three were involved in a love triangle. This love triangle happened during Taika's political reformation. At this time the people lived healthy, vigorous and passionate lives. We would like to show you the story of this beautiful, passionate love affair set against the lifestyle of the Yamato era.

Nukata-no-Okimi had a baby by Oama-no-Miko, called Toichi-no-Himemiko. After the birth of the child, she grew even more beautiful than she had been before.
When Nakanooe-no-Miko saw how even more beautiful Nukata-no-Okimi had grown, he fell completely in love with her and decided he wanted her for himselfe, thus forsaking his previous love, Kagami no Okimi. So Nakanooe-no-Miko (who was very forceful and strong) made Ouma-no-Miko (who was a more generous, introspective person) Marry Nakanooe-no-Miko's daughter knowing that Nukata-no-Okimi would turn the rebound as she had been in love with Ouma-no-Miko, which she did.
This affair made the relationship between the two brothers which had been very good, very bad.

When Nukata-no-Okimi realized the trick Nakanooe-no-Miko had played, she decided to try and apologize to Ouma-no-Miko and return to him. However it was announced that Nakanooe-no-Miko would become emperor so Nakatomi-no-Kamatari, a minister, would not allow her to do so.

While they are performing the Kusurigari or herb-gathering ceremony in Gamono, where a very grand banquet is also being held to celebrate Nakanooe-no-Miko's accession to the throne, Nukata-no-Okimi meets Oama-no-Miko, who is now the crown prince, after not having seen him for a long time. At this meeting Nukata-no-Okimi composes a famous poem.

--It was early evening./There were some stars in the sky above./It was a little bit dim when I walked around Murasakino,/And then Shimeno. I saw you waving to me./How bold you were!/But I was afraid that a guard in the field/Might see you.


The Revue: A Grand Carnival, 50th Anniversary of Mon Paris

I Love the Revue

Scene 1, Revue A
A man sings the theme song and 8 dancers dance behind him.

In the sparkling lights, dreams dance;
The dreams that are dancing there
Are your dreams of love

Scene 2, Revue B
One of the stars sings the theme song, on a glittering stage. Boys dance around her.


Scenes 3-4. I love the Revue
A number of girls are standing on a large staircase. When the star sings "I love the Revue", they make various patterns.

Scene 5: Golden Duet
The large staircase vanishes and only the glittering lights are left on the stage, where a man and a woman dance and sing.

Scenes 7-9. Silver Illusion.
The stage is covered with silver color. It symbolizes the dream of the sky.

Scene 10. Viva Takarazuka!
Gentlemen in black tail coats and top hats sing Viva Takarazuka while girls dance around and among them: Takarazuka, with the fragrance of a flower garden where a slumberer dreams

Scenes 11-12. Mon Paris
About 40 gentlemen in black tail-coats dance on the stage and sing the song Mon Paris together. Mon Paris was performed in Japan for the first time fifty years ago by Takarazuka Revue.

Scenes 16-18. A Bunch of Violets
Many violet nymphs dance to a variation of the song Sumire no hana sakukoro (When the violets bloom).

Scene 19. Dreamer
A boy wanders from place to place with an injured white bird. He doesn't know what to do with it.

Scenes 20-22. Birds of Paradise.
He finds out a funny place. There is a cage. It is blocked the cage up with an iron lattice. He also finds out a group of funny birds of paradise the other side of the lattice. To our surprise, the injured bird gets well now and she dances. He and the injured bird dance with the flamingos before they knew. They dance and dance as best as they can.

Scene 23. Eagles
Suddenly, a big eagle comes to fly there and attacks them, they stand against the eagle but they are defeated and slain.

Scenes 24-25. Phoenixes
There is a silence. It gets light gradually. All the slain birds and he get the eternal life in the end. They dance joyfully and thankfully.