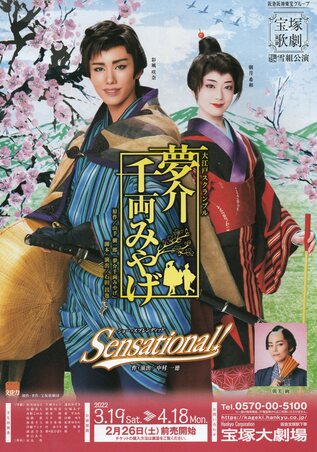 Beginning with "Momotaro Samurai", Yamate Kiichirō published many literary masterpieces, including "Yumesuke and the Gift of 1000 Ryō". An adaption of the masterpiece novel that depicts the activities of Yumesuke, a young and kind-hearted young man who has strong skills but hates fighting, it will be staged in the Takarazuka Revue as an exciting period drama.

Yumesuke, the son of village headman Odawara, is told by his father to practice doraku (a way of achieving enlightenment) by being a "commuter" and traveling to Edo with a thousand ryo (gold coins). Along the way, Yumesuke was targeted by a female pickpocket called "Oranda O-Gin", but when O-Gin was touched by Yumesuke's simple and bottomless kindness she fell in love at first sight. She became his wife and the two began a strange life together in Edo. Even though she strives to become a good wife suitable for Yumesuke, O-Gin cannot suppress the intensity of her temper.

Yumesuke solves the problems facing the people of Edo, such as the playboy young master of the Hikyakuya Shop, Iseya Soutarou, with "money and kindness." What does the encounter with Yumesuke's good intentions bring to people, and what is the end of Yumesuke's doraku training?

With the themes of "life," "love," and "hope," this will deliver a dancing show that creates a "sensational" wind that attracts people's attention.