Loading...
The Emblem of Venezia / Le Poison -Again-
READ THIS BEFORE EDITING THIS PAGE 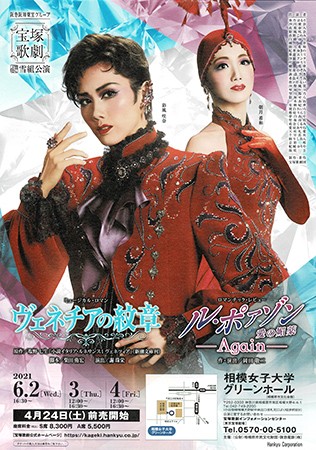 The Emblem of Venezia:


The Emblem of Venezia

At the beginning of the sixteenth century the Republic of Venezia was the most prosperous country in Europe. The two great powers of the day, the Ottoman Empire and the Holy Roman Empire, were putting pressure on Venezia. Carolus V, the King of Spain and the Emperor of the Holy Roman Empire, had Rome and the whole of the Italian peninsula under his control except for the Republics of Venezia and Florence. Mohammed II, the Sultan of the Ottoman Empire, had conquered the Byzantine Empire and occupied Constantinople.

Constantinople was the center of the flourishing trade between Western Europe and the Orient. Mohammed's grandson, Sultan Suleiman, ruled the greatest territory in the Mediterranean world. The Republic of Venezia depended on trade with the Turkish Empire.

In 1527, Alvise Gritti, a thirty year-old of great wealth returned to his homeland Venezia from Constantinople. He was the youngest illegitimate child of Andrea Gritti, the monarch of Venezia. His mother, Mellina, was a Grecian woman who lived in Constantinople. From the age of eight he was educated in Venezia for twelve years. He then returned to Constantinople after college. His great personal resources, his courage and his good looks made the tall young man in a few short years the idol of the ladies of the Empire, the trusted advisor to the Sultan and his Chief Minister, Ibrahim, and a most successful businessman. Alvise had everything in the world he desired except for a noble rank. His illegitimate birth put a title out of his reach.

Alvise was a proud man like his father and he could not bear to be excluded from the highest ranks of society. Alvise's birth make it impossible for him to marry the aristocratic lady he fell in love with. This was the motivation for him to seek his fortune outside of Venezia and to drive himself to amass such enormous wealth. His dream was nothing less than someday ruling Venezia.

When Alvise returned to Venezia he met Marco Dandolo, an old childhood playmate. Marco, now a Senator, was very happy to meet Alvise after a ten year separation. Marco believed Alvise's only reason to return to Venezia was to attend the wedding of his niece, Laudomia. Olympia, Marco's mistress, told Marco that she was certain Alvise had other more important reasons for coming back to Venezia.

Alvise returned to Constantinople. Soon after, Marco was ordered to serve as adjutant to Pietro Zen, the Venezian Ambassador to the Ottoman court. The Venezian Monarch, Gritti, told Marco that his son had long been a Venezian secret agent. He asked Marco to help Alvise.

King Ferdinand of Austria, the brother of Carolus V, invaded Hungary, a vassal state in the Ottoman Empire. The Sultan was forced to postpone his plans to push the invaders out because there was no General available to direct his army. Alvise volunteered to lead the attack.

The Venezian Ambassador, Zen, begged Alvise to wait until he could consult with the Monarch of Venezia. The Ambassador believed that it was politically unwise for the son of the Monarch of Venezia to lead the Sultan's army against Austria over yet another country, Hungary. However Alvise did not wait. He led the Sultan's army to victory and Alvise was appointed Governor-General of Hungary. Alvise had even higher ambitions. He wanted the Hungarian throne.

Marco reported Alvise's actions and ambitions to the national assembly in Venezia. The Monarch and the government feared that Alvise would cause the relationships between Venezia and Carolus V to break down. They fiercely opposed Alvise.

A mysterious and beautiful world where the members of Snow Troupe (centered on the new top duo Ayakaze Sakina and Asazuki Kiwa) are performing a masterpiece revue show with an adult fragrance composed of anecdotes of love from ancient times from east to west.