Loading...
Too Short a Time to Fall in Love / Le Poison II 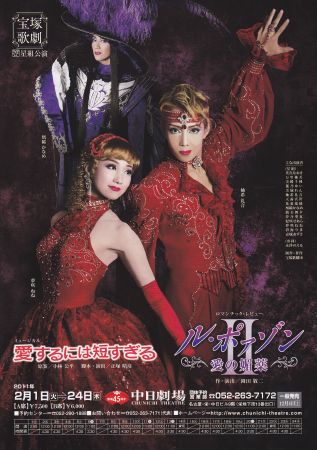 Too Short a Time to Fall in Love:

†  Announced 02/12/2011: Due to an injury, Tenju Mitsuki will be absent from the remainder of the run of this performance. Ooki Makoto is replacing her in the role of Billy as of the 12:00PM performance on the 12th.

Anthony becomes madder over Barbara and asks Fred not to stand in the way between Barbara and him, as Fred has his fiancÃ©e Nancy. As he listens to Anthony, he becomes conscious that he himself seriously loves Barbara. He wishes that he had met her well before his planned marriage to Nancy, and grieves over his misfortune. Barbara now sees Fred more than her simple childhood friend. They met again at the time when each was about to start a new life. They must now try to find the best solution within the limit of four days. The ship continues its journey along with the swaying feelings of Barbara and Fred.