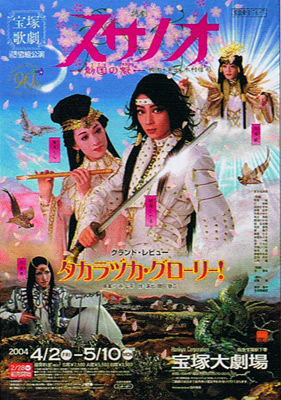 Available on DVD: Yes (release date 6/21/04) & VHS
DVD Scene/Music Cut: Yes
In Takarazuka Glory!: Scene 6 "Blood, Sweat, Tears, and Love" and scene 7 "Romance" were cut and placed at the end of the video without sound.

This "drama in verse" as it is pre-titled, is based on the ancient Japanese myth of Susano-o and the many-headed serpent Yamata-no-Orochi. Susano-o is the youngest brother of Amaterasu, the goddess of the sun, and of Tsuki-Yomi, the god of the moon. According to the tale, Amaterasu and Susano-o produced children, she from pieces of his sword, he from her necklace. But they had a disagreement and Susano-o became violent. He was banished from the High Celestial Plain, and Amaterasu hid in a cave in protest, casting Yamato (the ancient land of Japan) into darkness.

As the play starts, Tsuki-Yomi is prodding Susano-o to take up his sword and to work to save Yamato from the darkness and chaos it has fallen into. Susano-o resists, wanting nothing more to do with violence. But watching the people attack an old man and a young woman, he acts. The old man is already mortally wounded, but before he dies he explains to Susano-o why they were attacked. For many years the many-headed serpent Yamata-no-Orochi has demanded a young maiden sacrifice. The old man has given up one of his daughters every year for seven years. Now he is left with only his youngest daughter, Inada-hime. In despair, he asked the other people to give up one of their children instead, but no one is willing to do it. He begs Susano-o to go and defeat the serpent, and then dies.

His daughter is devastated, but determined to make her father proud. She asks Susano-o to accompany her to fight the serpent. He refuses, saying he won't fight again. She says she will go alone, or kill herself instead. He then tells her the story of why the light has disappeared from Yamato. From this, she confronts him with the knowledge that it was Susano-o's unreturned love for his sister which turned him to violence. He refuses to listen to such things, but she eventually wins him over, telling he needs to discover his own strength to fullfill his wishes. He decides to find Yamata-no-Orochi, and she convinces him to let her follow.

In the Forest, Susano-o and Inada-hime are shocked to discover her seven sisters alive and well, along with many other children from Yamato. They meet the master of the Forest, Aosetona, who claims that Yamata-no-Orochi is not here. He explains that he has kept the young men and women of Yamato because no one has come for them, and because he intends to keep them safe until Yamato has been rebuilt. The children refuse to return to Yamato. Convinced that this is what they want, Susano-o drinks a farewell drink with Aosetona, and leaves Inada-hime with her sisters. But as he leaves, wondering how to rebuild Yamato, he stumbles and collapses. Aosetona has poisoned him. Aosetona's real plan is to destroy Yamato, the only way to save it. He also reveals that he has substituted the souls of all of the young men and women he keeps in his Forest.

However, just as Aosetona moves to claim Inada-hime's soul, Susano-o rises from the fires of hell and reveals his true identity. Aosetona then reveals himself to be Yamata-no-Orochi and combines the substituted souls to create the many-headed serpent. Susano-o fights and defeats the serpent, but then Amaterasu appears, chastising him for violence and taking away his sword. With it, Amaterasu wounds Susano-o again and again. Inada-hime senses that something is wrong, and tries to wrest back the sword, but is cut down by Amaterasu. Finally finding the will to fight back, Susano-o stabs Amaterasu, who is then revealed to actually be a phantasm created by Aosetona, who dies from the wound.

Tsuki-Yomi arrives as his brother and Inada-hime lie dying. Susano-o accuses Tsuki-Yomi of setting up the situation, as the gods feared Susano-o and hoped that his death would help bring Amaterasu out of hiding. Tsuki-Yomi admits that this is true. Susano-o has two requests: that Tsuki-yomi saves Inada-hime, and that he uses his remains to create a flute, which should then be played in front of Amaterasu's cave.

On the High Celestial Plain, the gods are celebrating the death of Susano-o when Tsuki-Yomi arrives with Inada-hime. He tells them that Susano-o is alive, and orders Inada-hime to play the flute. The sound is shrill and discordenant, and the gods flinch from it, but Tsuki-Yomi orders them to accompany the sound with song and music, and to open Amaterasu's cave.

As the triumphant song ends, Amaterasu emerges, demanding to know where Susano-o is, for she came out when she heard him. Inada-hime thrusts the flute at her, and Tsuki-Yomi admits that Susano-o is dead. Amaterasu asks the other gods what they did to help Susano-o, and they all look away in shame. She then goes to her cave, but doesn't hide again as the gods fear. Instead, she throws the flute into the place from which she and her brothers were born.

A miracle occurs, and Susano-o emerges, ressurrected. She claims that his power is needed for Yamato. But he is the violent storm god once more, out for revenge. It takes Inada-hime to tame him and remind him of the future he can build.

The children return to Yamato from the Forest, fully recovered, and everyone celebrates.

A revue to celebrate the Takarazuka 90th anniversary.

Brian tries to dance, but isn't able to. Several invisible illusions encourage him.

Singing by the two top stars, and a pair dance.