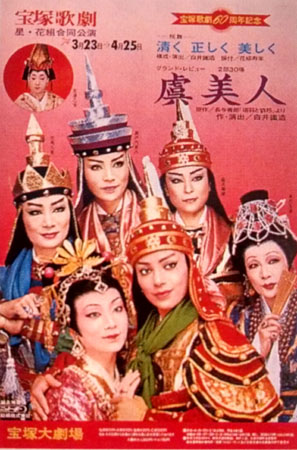 The First Emperor of Chin brought the whole country under his sway and the people were reduced to great misery by his tyranny. At that time, a number of rival chiefs all over the country were rising against Chin and among them, the most powerful were Hsiang Yu (of Chu) and Lyu Pang (of Han).

A village youth, Wan Lin by name, who is somewhat weak in the head, visits the shrine with flowers for the success of his love toward Chin Hua, a beauty of a neighboring village. However, his prayers are not answered; he becomes the object of the wiles of Hung Lin, who loves him. In desperation and in fear of the passion of Hung Lin, he becomes a solder to Hsiang Yu.

Meanwhile, Han Hsin, a diligent youth studying strategy, has been leading a hard life. He fishes in a stream daily and sells his catch in the town to support himself. It happens one day that Han Hsin, who is extremely hungry, is fishing in the stream as usual and is found and given food by a beautiful girl, Tao Niang, daughter of Yin Tung, Governor of Huichi. The girl falls in love with him, but he stops visiting the place as he is ashamed of his poverty and having been given food.

In order to overthrow Chin, Yin Tung attempts to win Hsiang Yu and Hsaing Yu's uncle Hsiang Liang to his side. However, his scheme fails through the treachery of Chung Li-mei, one of his vassals. Hsiang Yu kills Yin Tung.

In the meantime, Han Hsin, who has been still leading a hard life, has a chance at last to launch his ambition. One day, Han, on his way from a river, meets three hooligans in the street who pick a fight with him However, being submissive, he craws between the legs of each of the hooligan in line, as requested. All the passers-by and other people scorn him , but his forbearance draws the keen attention of Fan Tseng, the aged tactician of Hsiang Yu. He then becomes the subordinate of Hsiang Yu through the good offices of Fan Tseng.

Less than two months later, hsiang Yu has a 200,000-men strong force and becomes the most powerful leader in the country. Upon his departure, he marries Yu Mei-jen, a lady of matchless beauty.

Lyu Pang had been cooperating with Hsiang Yu, but his wife Lu Fei has been secretly devising a scheme to assassinate Hsiang Yu in order to make her husband ruler over the whole of China.

Having been searching for Tao Niag, Yin Tung's surviving daughter, Lu Fei finds that the girl, now a travelling entertainer, has been working at a village tavern. She suggests and encourages her to take her revenge as a boy, changing her name to Chin Hsiang Feng. Tao Niang then serves as a page at Hsiang Yu's mansion.

However, her attempt fails and she is arrested by Hsiang Liang, Hsiang Yu's uncle. At that time, Hsiang Liang had been plotting to make an attempt on Hsiang Yu's life and thus rule over the country. Accordingly, he attempts to make use of Tao Niang to kill his nephew, then become his mistress. However, she kills Hsiang Liang and escapes the danger.

Owing to his extremely violent temper, Hsiang gradually loses his popularity while Lyu Pang, on the other hand, steadily wins public confidence on account of his natural virtue.

When Hsiang Yu marches on Hsienyang, he hears that Lyu Pang had already advanced into the capital of Chin and had released 3,000 beauties from the Chin's palace called Afangkung.

Hsiang Yu, in anger, invites Lyu Pang to his camp at Hungmen in an attempt to kill him. However, his attmpt fails due to the intervention of Chin Hsiang-feng, as well as Chang Liang and Fan Kuai, both faithful subordinates of Lyu Pang. Lyu Pang escapes from the jaws of death.

After two years, Lyu Pang, who has been in the mountains, succeeds in gaining many more troops and a strong reputation. One of his most trustful officers is Han Hsin, who once was a subordinate of Hsiang Yu.

Tao Niang, who had escaped from Hsiang Yu's camp just after the Hungmen Incident, is now the wife of Han Hsin.

Taking his tactician Fan Tseng's advice, Hsiang Yu captures Lyu Pang's family members, who were living in their native country. Having heard of this , Lyu Pang decides to attack Hsiang Yu. Lyu Pang and his men, including Hsin as a chief of staff, start for the front.

A decisive battle is fought between Hsiang Yu and Lyu Pang at Chiulishan. The fighting goes against Hsiang Yu. Fan Tseng is killed during the fight. Lyu Pang succeeds in succeeds in resucing his wife from Hsiang Yu's captivity. Unfortunately, his mother had already died of illness while o the way to the enemy's camp and his son was murdered by Hsiang Yu's men.

For Hsiang Yu, things go from bad to worse. His mean begin to desert the camp. His fortress is besieged by Lyu Pang's forces - now totaling 500,000 - while his own men number 1,000.

Wounded and returning from his sortie, he hears the besieging troops singing the song of his native country -which makes him jump to the hasty conclusion that his native land has already been taken by the forces of Lyu Pang.

He is now determined to make the last attack on which he ventures his entire fate. He suggests to his wife, Yu Mei-jen, to return to her native village to live the rest of her life in peace. However, she refuses.

Yu Mei-jen encourages her husband to break through the besieging army and plan a second uprising. She dances in celebration of his pending attack, and then suddenly commits suicide. Her intention was to make him fight without any restraint.

Hsiang Yu makes a last sortie and, although he can escape the Wuchiang, he kills himself as he has lost all his troops.

At the very place where Yu Mei-jen ends her life, red poppies bloom as if in grief over the ill-fated life of the beauty.