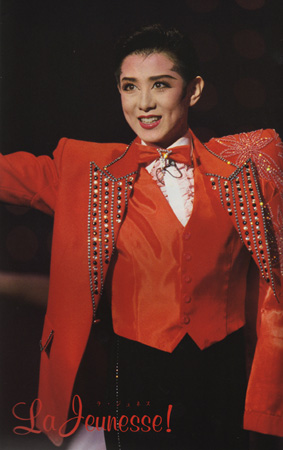 Natasha of the Rainbow:

Available on VHS: VHS only

Natasha of the Rainbow

In 1932, the shadow of war threatens, but Japan is still at peace. A sponsor of the Imperial Symphony, Lord Kuretake Kimiya, is deathly ill. He calls to his bedside Sanjou Kaoru, who is both the fiancé of his daughter Umeko and an up-and-coming conductor. Lord Kuretake has a very serious request: Many years ago, he had a daughter with a Russian woman and he begs Sanjou to search for her in Shanghai. Because her mother, Anastasia, an opera singer, was a close friend of the princess, when the revolution came, she vanished with the imperial family. Since then, Kuretake has married and had a family, and he wants his daughter Natasha to be raised in his home.

Secretly, Sanjou and his manager Nagaoka travel to Shanghai and Sanjou meets a beautiful girl singing at a jazz club in a hotel. Because she's scorned for her mixed race, she has become a rough tomboy... and it turns out that girl is Natasha! She has been raised by the Kurisaki family, who own a small restaurant, and she and their son Takeshi are like brother and sister. Sanjou invites Natasha to a concert, but at the last minute she must stand in for the star. Sanjou is amazed by her incredible singing voice. Now he determines not only to bring her home, but to make sure she gets proper opera training and becomes a true prima donna. Even Takeshi tells her it would be best to go to Japan. Takeshi, it turns out, thinks of Natasha as more than a sister. Not wanting to risk never seeing Sanjou again, Natasha goes on the boat with him to Japan.

But life in Japan proves to be nothing but misery for Natasha. The Kuretake family treats her like a servant and Umeko is suspicious of her relationship with Sanjou. As she travels home from school, Natasha learns that Lord Kuretake has died. She decides to run away. Takeshi has followed her to Japan, and he and Sanjou search desperately for her on the city streets...

Chapter 1 A Sepia Photograph (Opening)
When a young man in sepia begins to sing in front of an old album, photographs of young men who are best friends from times past loom up on each page. The boys come out and so too do beautifully dressed girls. They dance to a tune sung by a pop star.


Chapter 2 Yesterday, Once More
Young women of the 1960's sing a song for their boyfriends. A medley of contemporary hits is performed by a group of teenagers in front of a typical 1960's American hamburger shop. Led by Tommy, the young men and women dance with fervor. Three couples appear and sing about the pain of love. The young men and women return, and this time sing about the joy of life. At the climax, the sound of a helicopter is suddenly heard overhead. Everyone vanishes, and Richard appears. He stares at Cindy who is dressed in a wedding dress and surrounded by her family and friends. She walks away hand in hand with the bridegroom.


Chapter 3 Heat Wave
The setting is a tropical island where palm trees grow thickly. Robert, the most popular person on the island, is joined by other men and women. They sing a bright and cheerful song. Robert meets a lively girl called Patricia, with whom he dances. Suddenly, a gust of wind blows up and a squall attacks. Everyone runs to escape iIt. When the rain stops, Robert, Patricia, and the others on the Island celebrate by singing and dancing in the sunlight.

Chapter 4 The Joy of Love (Young Executives)
The setting is a large salon where many young executives are gathered. A pop star appears and performs. After the young executives left, a group of young ladies arrives and they dance daintily.


Chapter 5 Dean (An After-Image of the Spring of Life)
A traffic accident takes place on a highway. James Dean, the driver of the Porsche, is killed. Jimmy lives in the hearts of the young boys who mourn his death.


Chapter 6 The Rocket
Girls dressed gaily in all the colors of the rainbow perform a rocket dance.


Chapter 9 Finale
A gala parade and finale incorporating the theme tunes of the entire show.

The play ends abruptly because the manga was still running at the time it was written - when the play gets to the point the manga had reached, it simply stops, with very little resolution.