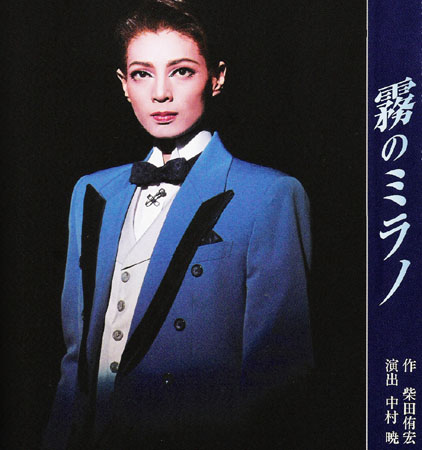 Milan Wrapped in a Fog:

Northern Italy is under Austrian rule in the late 1850s. Lorenzo Croce, an official of Milan, sees for the first time Francesca, the daughter of Martini, a Milanese silk fabrics merchant. She is protesting to Major Karlheinz Berger of the Austrian army's intelligence bureau about a recent order. The headquarters of the Austrian army has suspended the business of her family due to a suspicion that her elder brother Pietro is a member of an anti-Austrian group. Lorenzo is ordered by his superior to investigate Pietro. He cuts in between Francesca and Karlheinz identifying himself as the official of the investigation department of the city and settles the dispute.

Lorenzo and Francesca go to Bar Amapola, where he meets with Giambattista whom he has not seen for several years. Giambattista is back from the country where he took refuge. Lorenzo and Giambattista were active members of the anti-Austrian movement when they were students. Ten years ago, there were five days of intense street fighting in Milan between the rebelling Milanese population and Austrian troops. This period of time was later called the Five Days of Milan. Lorenzo's father was judged responsible for the insurrection and seen as an anti-Austrian aristocrat. His entire property was thereby taken away, and Lorenzo scarcely managed to find a job in the municipality of Milan. Giambattista's family was destroyed. He went to neighboring Sardinia, where he became a merchant. He has dealings with the Martinis and has seen Pietro more than once. Giambattista insists that Pietro is most unlikely to take part in any anti-Austrian movement.

The coquelicots in a flower shop at a street corner attract the attention of Francesca, to whom Lorenzo tells of his souvenir of coquelicots — amapolas in Spanish — which he had seen during his stay in Spain. Francesca weeps in silence remembering the field of coquelicots she once saw while on a picnic with her family. Those were the happy days when she had basked in the affection of her parents and elder brother.

Lorenzo and Francesca go to Casino Palazzo, which is said to be a hideout of the members of an anti-Austrian movement. Its proprietress, Madame Emma, and the employees deny that Pietro is in contact with any such members. Pietro, then heavily drunk, comes in. Soaked in drink and gambling, he looks like the last person to have a connection with any anti-Austrian movement. Lorenzo promises Francesca that he will go to the Austrian army's headquarters the next day and tell them what he thinks of Pietro in order to clear their suspicion of him.

The next day, Lorenzo visits Karlheinz at the headquarters. He persuades the major that Pietro is being mistaken for a member of an anti-Austrian movement. Lorenzo succeeds in removing most of the suspicion of Pietro. Karlheinz recognizes the dignity in Lorenzo's heart and begins to think that Lorenzo is no ordinary person.

Although Lorenzo seems to work as a mere official in Milan, in fact he has another face. He is the very leader of the anti-Austrian movement which Karlheinz is looking for. The movements to expel the Austrians become stronger throughout Italy.

On the night of the festival when the Milanese dance and sing, Lorenzo invites Francesca to see a field of coquelicots the following day. Ever since they met by chance, they have been mutually attracted to each other and are now in love.

In the field of coquelicots, Lorenzo reveals to Francesca his real identity as the leader commanding several anti-Austrian groups while using Casino Palazzo as his headquarters. She is afraid lest he should go to battle against the Austrians leaving her behind. She wants to keep him from going to war. However, she thinks over the facts that the members of the anti-Austrian groups have secretly made every effort to prepare for an insurrection and are at last ready to rise in revolt. "You ought to go to war", she says, after reading his intention. She also tells him she fears that he would be treated as a coward because of her detaining him. He embraces her and is determined to fight for the dignity of Milan.

In November, the headquarters of the Austrian army finally identify the leader of the anti-Austrian movements and are trying to trace him. Giambattista decides to join Lorenzo's group while tension between the Austrians and the Milanese citizens is mounting. Francesca happens to meet again with Karlheinz. She learns from him that the leader of the anti-Austrian group has been arrested and will be brought before a military tribunal. In fear of the worst, she implores him to help Lorenzo saying, "I will do anything in order to save him."

Lorenzo again meets with Karlheinz at the Austrian headquarters. Although they are enemies, they have a good understanding of each other. Concerned about the other's standpoint, they calmly talk. They think that they could be friends intimate enough to talk of the sadness of fighting and the joy of loving. The convoy to take Lorenzo to Sforza comes in before them...