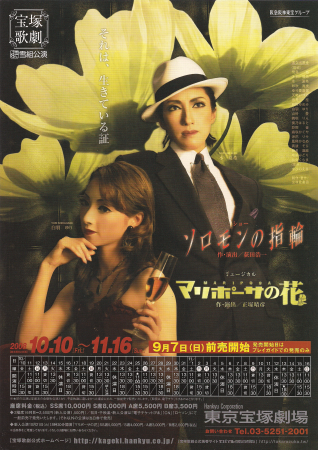 Scene 1
Invited by jewelers, a young man steps into a world ruled by spirits of rings. While looking for a pretty mistress, he gets lost.


Scene 2
Gentlemen and ladies dance within a magic ring.


Scene 3
A jungle grows thick in the ring. Beauties less than humans and more than beasts are feasting.


Scene 4
The ring falls into the sea. The ring makes many ripples and changes into a ring of fantasy.


Scene 5
The wind is eerily whirling in a desolate land. A traveler sings about the hardness of the land while an angel is overcome with grief. A west wind brings in the night.


Scene 6
A memory is etched on the ring. The ring has seen festivals filled with pure light, fresh mornings, and many a joyful and happy event.


Scene 7
The ring confines everything and falls asleep keeping in it a variety of thoughts.

A man called Nero is sneaking political prisoners out of a small country into nearby Mexico hiding them in cargo. He outwardly runs a high-class nightclub while smuggling behind closed doors. Although Escobar, Nero's best friend, knows that President Saldivar is secretly allowing them to carry on this illegal trade, he is afraid of attracting people's attention. Nero is determined to do his best for his country that has gone through coup after coup with the result of its people growing more and more discontented. Nero has a purpose for his smuggling. He and Escobar at one time belonged to a troop, which fought for the rise in power of the real government. However, the military government, backed by a large country took power and continues to exploit and repress its people, leaving people in poverty. Nero realizes that arms could hardly ever bring any positive changes. He decides to do without violence what he can for the good of his beloved country. His smuggling business is started in order to make money to build hospitals, schools and so forth. Just before starting his business, he meets Ismayor, a plantation owner who keeps his distance from the government. Nero tells him his idea and asks for his cooperation in starting the illegal trade. Ismayor gives his willing consent saying that he would like to be of some help to their country. Nero eventually meets Ismayor's daughter, Selia and has a feeling that he would fall in love with her. Some time later, Selia begins working as a dancer at Nero's nightclub and becomes his special one just as he had foreseen.

President Saldivar's birthday party takes place at Nero's nightclub. Saldivar introduces Nero to Ferrutti, who Saldivar says is a multimillionaire from Miami. Ferrutti invites Nero to talk about business behind the scenes. Suspecting danger, Nero replies that he cannot understand what Ferrutti is asking him. Nero immediately tells Escobar about Ferrutti, and together, they discuss what should be done, if anything.ã€€ Nero leaves Escobar and sees Linares, Selia's younger brother who is working as a singer at the nightclub. All of a sudden, they hear the firing of a gun. An employee of the nightclub hired on the recommendation of Linares has shot at Saldivar. Just in time, Escobar intervenes and saves Saldivar. Nero and Escobar have mixed feelings as they know that the employee was determined to kill Saldivar thereby getting rid of the root of all evils. Nero concludes that it was Linares who handed the gun to the criminal. He secretly asks Linares if he gave the gun to the would-be assassin. Linares explodes in righteous anger declaring that he cannot tolerate having his country exploited by a foreign country. He tells Nero that a violent war will begin as soon as the leader of his group returns from Mexico where he is taking refuge. He refuses to listen to Nero's advice that a reckless battle will bring nothing. He goes away leaving Nero behind.

Escobar, who has been collecting information on Ferruti, tells Nero that he is the boss of the mafia controlling Miami. Nero and Escobar understand that Saldivar wants to break them up and join hands with the mafia. They decide to suspend smuggling for the time being so as not to get Ismayor in trouble.

Nero calls on Ismayor in order to explain to him of what is going on. Selia anxiously tells Nero that she has been unable to get in contact with Linares since the failed assassination of Saldivar. He reveals to her that her younger brother is a member of a rebel group. She is quite taken aback by the news, as she believed he has had nothing to do with antigovernment activities. She feels depressed upon the realization that a safe and peaceful life is a rarity in her country. Nero cheers her up by assuring her that there will be better days. He asks her to stop working at the nightclub in the interest of her safety and promises her that he will come back as soon as he is out of danger.

Presently, the mafia and the rebel group are each eager for the control of the country. Nero is determined to fight again along with Escobar at the risk of their lives. They aim to have a showdown with both Ferruti and Saldivar as well as to bring peace to their country where Nero wants to live with his beloved Selia.