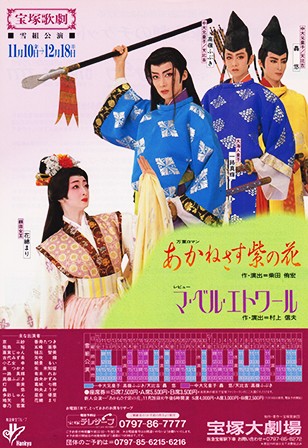 Asuka Period, Japan. Ooama no Miko meets Nukata no Ookimi when he goes with his older brother (Nakano Ooe no Miko) to her house. There Nakano Ooe is wooing Nukata's older sister, and so the two younger siblings meet and fall in love. Five years later, Ooama and Nukata are married, and a daughter has just been born. Ooama talks happily to Nukata about his plans with his brother to jointly rule their empire of Yamato. As Nukata listens to his naive, happy chatter, she becomes uneasy. Later, Nakano Ooe arrives and tells Nukata that she has grown and become very lovely. He has fallen in love with her, and wants her for his own. Caught between the two brothers, Nukata flees back to her father's house.

Nakano Ooe's retainer comes to fetch her, telling her not to be selfish. With her missing, rumors of estrangement between the brothers have grown and their vassals are rebelling. She returns to court. There Nakano Ooe makes it clear that he will not bend in this. He needs Nukata. Under political pressure, Ooama agrees to give up his wife, allowing his brother to make her his empress.

Meanwhile, Nukata's childhood friend has followed her to court. Although married, Amehiko continues to hold Nukata up as his perfect lady, and finds it soothing to be in sight of the palace where she lives. His wife worries for him, as he is stretched thin by his consuming passion. His brother comes to fetch him home, and he flees once more to Arima.

In Arima, the empress Saimei goes to the hot springs to relax. She has many memories there, including the birth of her first son, Nakano Ooe. She speaks with Nukata, wondering if perhaps her son has grown too great for his own good. Nakano Ooe has followed them to Arima, intending to carry out his own plans by killing the young Arima no Miko, whom rumor says is planning a rebellion. He tells Nukata of his plans, and she begs for the young boy's life, but Nakano Ooe stands firm, pulling her to him. Amehiko walks by then and discovers them. He is crushed to see that the rumors are true, and that Nukata is with Nakano Ooe. Now devastated, he runs from her and back to his home, where he collapses in the arms of his wife.

A journey through the 20th century in song and dance.


Scenes 1-2: Prologue
People in the late 20th century. A prince appears and sings about suffering at the end of this century. He embarks on a journey in search of dreams of the last 100 years. All warriors move back to the past in a time machine which looks like a huge space ship. Dynamic dancing begins, and the world in the early 20th century appears.


Scene 4: Ca C'est Paris: Parisian Streets
In front of a cafe on the streets of Paris in the 1920s and 30s. Four Parisians with Frere Jacques-style mustaches start gayly singing revue songs of Mystanget. Then, from the Metro exit emerge a gigolo, a street woman, a rich madam, a girl selling flowers, a child and a garcon, singing the high praises of paris.


Scene 5: A night in Paris (in front of Madeleine Temple)
Night falls on Paris. Just as the gas lamps are turned on, a gentleman in a swallowtailed coat appears, singing and dancing romantically.


Scene 6: An apartment
The room seen from the eyes of a cat. There are a huge chair and table in the room, and the Eiffel Tower is visible through the window. At night, a French antique doll begins to move. An identical doll also shows up, and they dance merrily. As the doll steps on the tail of the black cat (Chat Noir), the cat gets angry and begins to dance. Chat Noir loves the bird in the cage (Chanel). They dance passionately. At last, Chanel rises into the air.


Scene 7: Revue au revue
Two men in swallow-tailed coats sing a song dedicated to the springtime of life in Paris. A lady and a gentleman with a feather fan appear and dance stunningly.


Scenes 8-10 Love in Shanghai
Shanghai in 1910. A British military officer wanders through the streets in the rain. Amidst crowds carrying umbrellas, he meets a Chinese girl and falls in love with her. The Chinese girl invites the officer to a mysterious parlour where he is made to inhale strange smoke. The Chinese girl is actually a spy seeking information from the officer. He drifts into a state of hallucination. A cover of psychedelic flowers floods the stage and he drowns in his overpowering love for her. The Chinese girl is also falling in love with him. They truly love each other. However, she is taken away by a group of spies. The officer is left alone, and embraces the Chinese fan she has left.