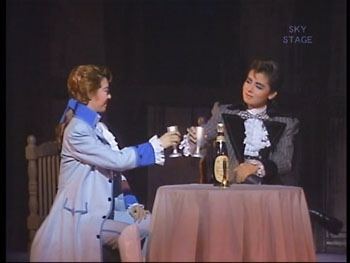 A Tale of Two Cities

It is the year 1775, and England and France are undergoing a period of social upheaval and turmoil. The forces that are leading to revolution in France are colliding with a circle of people in England, causing their destinies to be irrevocably intertwined.

The musical starts in a sunny park. Sydney Carton is trying to work up the courage to speak to Lucie Manette, a young woman who has been raised as an orphan and a ward of Tellson's bank. In the end they speak, but she is soon called away by Charles Darnay.

Lucie learns that her father is alive and has recently been released from prison after eighteen years of unjust incarceration. She travels to the French suburb of Saint Antoine with Mr. Jarvis Lorry, a longtime Tellson's employee who had managed her father's affairs before his imprisonment. They find her father at the home of Ernest Defarge, a former domestic of Dr. Manette's who has housed the doctor since his release. Though her father is teetering on the brink of insanity, she solemnly vows that she will be true to him and devote her life to helping him recover himself. The family relocates to London, and Mr. Lorry becomes a friend of the family. After time, the doctor begins to recover and resumes his practice, and though he occasionally reverts back to his trance-like state, he slowly but surely returns to himself. Throughout the process, he and Lucie become extremely close.

After a period of five years, Lucie and her father are called to testify in the trial of Charles Darnay, a French citizen and London resident who has been accused of treason against England. Lucie testifies that she and her father saw Darnay on a ship bound for England the night she brought her father back home to London, and that he was conversing with other men and poring over documents. Though the testimony is damaging, Lucie notes that Darnay had been extremely kind and helpful to her in caring for her father on the ship, and she admits that she hopes her testimony has not doomed him. Darnay is ultimately saved when one witness' testimony hinges on the witness' certainty that he saw Darnay at a certain locale at a particular time. When Sydney Carton, a member of Darnay's defense team, removes his wig in court, it is revealed that he bears a striking resemblance to Darnay, thereby eroding the witness' credibility in terms of his certainty of having seen Charles Darnay himself. Darnay is ultimately freed, and this circumstance draws everyone involved closer together. Darnay, along with Mr. Lorry, becomes a friend of the family, and Sydney Carton becomes a regular visitor, if not an entirely welcome one--he is frequently drunk, often sullen, and coarse in his manner. Though the others complain of Carton's manner, one evening he confides in Lucie and tells her that while he has made nothing of his life and will not improve before he dies, he wants her to know that she has awakened feelings in him that he thought had been stamped out long ago. She asks if she can help him, and he says no, but that he wants her to know that he cares for her deeply. The group continues to visit regularly, and on one particular evening, Lucie notes that there is an ominous feeling in the air, as if she is able to forecast that grave danger and turmoil are in her future. But the family continues to be happy, and Lucie eventually marries Darnay, who tells her father that he has a secret that no one else knows. Dr. Manette asks Darnay to save the secret for the marriage morning, and Darnay does.

A year passes. Darnay returns to France to attend to the business that had gotten him into trouble in England in the first place. He pays a visit to his uncle, a corrupt aristocrat who is so cruel that when his carriage driver recklessly ran over and killed a peasant's child, he blamed the peasants for being in the way. After having dinner in his uncle's lavish chateau, Darnay wakes up to find that his uncle has been murdered.

He returns to England, and several more years pass. He and Lucie have two children, a son and a daughter. The son passes away as a young boy, but the family continues to be relatively happy despite this tragic circumstance. But the foreboding sense looms in the air, and Mr. Lorry notes that many of Tellson's Paris customers are frantically transferring their assets to the London branch, signaling some kind of danger in Paris. He notes that he will have to travel to Paris to help the office there handle the volume. One day, Mr. Lorry remarks to Darnay that he has received a letter addressed to a Marquis St. Evrémonde in care of Tellson's. Darnay says that he knows the man and will deliver the letter; in truth, Darnay is the Marquis St. Evrémonde, a descendant of the corrupt rulers of France. The letter is from an old friend who has been put in prison unjustly and who fears that he will soon be executed. Darnay, who has so long avoided France for fear of what might happen to him there because of his heritage, realizes that he must go.

He goes to intervene on his friend's behalf and quickly realizes that the situation is worse than he could have imagined. A revolution has taken place; the peasants have overthrown the government and are murdering anyone who they feel represents the old guard. Darnay is immediately taken into custody, though he tries desperately to explain that unlike his uncle and father, he is on the peasants' side and wants to help them. They disregard his testimony, and none other than Ernest Defarge, who has since become a revolutionary, sends Darnay to prison. By this time, Lucie and her father have learned that Darnay has returned to France, aware that Darnay is probably in grave danger. The revolutionaries treat Dr. Manette as a hero, however, because he had so long suffered at the hands of the same government that oppressed them (and that they have since overthrown). Because of his newfound influence, he is able to learn where Darnay is, and he intervenes on his behalf.

When Darnay is tried for his life in front of a corrupt and farcical tribunal, only Dr. Manette's testimony saves him. He is freed, but before even one day passes, he is recaptured on the grounds that three French citizens have denounced him. He is forced to undergo another trial, at which it is learned that the citizens who denounced him are Ernest Defarge, Madame Defarge (Ernest's cruel and vengeful wife), and Dr. Manette. When Dr. Manette declares that he has never denounced Charles and that whoever accused him of doing so is lying, Defarge presents a paper to the tribunal to be read aloud. The paper turns out to be a journal that Dr. Manette had written after ten years in prison and hidden in a chimney; Defarge discovered it when the peasants freed that particular prison. The account reveals that Dr. Manette had learned that a Marquis St. Evrémonde and his brother had cruelly murdered a peasant, and he learned this because the men retrieved him to give medical attention to their victims before they died. He saw how the brothers treated their victims so cruelly, and he had written a letter to the government informing them of what he saw. The brothers Evrémonde learned that Dr. Manette had written the letter. Shortly thereafter, he was taken prisoner, and his wife was never informed of what happened to him. For this, Dr. Manette wrote that he denounced the brothers Evrémonde and all their descendants.

After the letter is read, the court erupts into an uproar, and the tribunal votes unanimously to execute Darnay. Lucie and her father are beside themselves; by this time, Carton has traveled to London, and he and Mr. Lorry confer and try to decide what to do. During this time, Dr. Manette tries to save Darnay, but he relapses into his trance-like state and is unable to do anything. Through a series of coincidences, Carton discovers that one of the men who testified against Darnay at his trial several years earlier is working as a spy in France. He learns that the man is a spy in the prison where Darnay is held, and he blackmails the man into granting him access to Darnay. Mr. Lorry remarks solemnly that this will not help Darnay; Carton says he knows this, and Darnay's fate seems irrevocably sealed. Carton, however, has other plans. He goes to the prison on the day of Charles' execution on the pretense of visiting him one last time. But once he gets inside, he uses his physical resemblance to Darnay and his ability to manipulate the spy to pull off the ultimate sacrifice. He drugs Darnay into a stupor, switches clothing with him, and has the spy smuggle Darnay out of the prison and into a waiting carriage that also includes Dr. Manette, Lucie, and Mr. Lorry. He tells no one of his plan, and not even the Manettes know it. They are waiting in their carriage for Carton, fully expecting that he will join them and that they will leave France in a hurry. The rest of the family is in danger because of Madame Defarge, who wants to denounce all of them. The peasant that the Evrémonde brothers murdered was her brother, and she wants revenge against Darnay and his entire family. The spy smuggles Charles to the waiting carriage, and the family escapes France. Carton, however, goes to the guillotine and dies for Lucie, fulfilling his promise to her that he would die "to keep a life you love beside you." Just before he dies, he thinks to himself that his final act is far better than anything else he has ever done.

"Spider and the Fly"

A rather naughty-looking soldier boy and girls come out. The soldier sings.


Scene 9: Moonlight Wave
"Slap That Base"

Daichi Mao appears in a Bengal tiger stripped costume, along with lots of very odd creatures in geen wigs.

The cat soldiers reappear and torment the tiger until the odd creatures come and help him. He finally challenges the soldier and wins.

The tiger man reappears, this time as a pimp tiger!

Girls with umbrellas appear. The lead girl sings, and is sung to by vaious helpful older characters.

Daichi Mao and all dance cheerfully.


Scene 13: On the Street Corner

Tsurugi Miyuki apears in a dramatic black costume and sings and dances with a woman.

The characters of black and white dance.