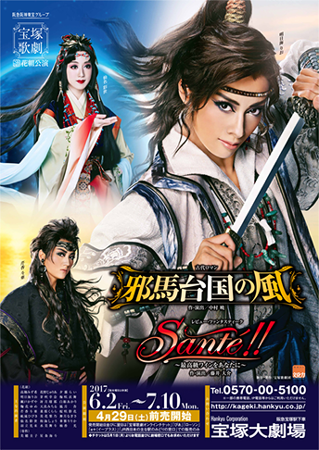 Ancient Japan was full of small territories, so new wars kept starting without any respite. Among those territories, Yamatai-koku was a fertile area which believed in the importance of union, but as its influence began to spread the rival Kuna-koku begins to desire its rich resources, and attacks Yamatai-koku continuously.

Takehiko, whose parents were both killed by soldiers from Kuna-koku, dedicates himself to the art of war in order to survive. One day, Takehiko rescues a girl called Mana from Kuna soldiers. Mana, who can hear the voice of the gods, tells Takehiko “we met once before long ago, and swore we would meet again.” After that, Mana becomes a shaman, and following her advice Takehiko, wanting to protect people’s peaceful way of live, decides to do so as a warrior for Yamatai-koku. Eventually Mana becomes the most powerful shaman, and is crowned queen of Yamatai-koku, with the new name Himiko. Takehiko is driven by thoughts of Mana, who is now beyond his reach. But because of a certain affair, the two finally have a chance to meet again…

This show is a magnificent historical fantasy centering on the new top combi, Asumi Rio and Senna Ayase.


Revue Fantastique: “Santé!!” ~only the finest wine for you~