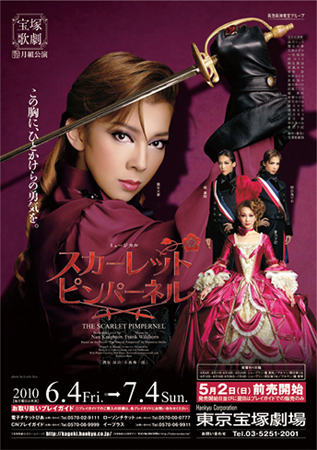 †  Due to poor health, Ayazuki Seri appeared only in the finale and parade, beginning with the 11:30 show on June 20th. Kijou Mitsuru performed the role of Sergeant Pipeau for both performances on the 20th; Chinami Karan filled in for her from the 22nd - 24th. Seri returned on the 25th.

At the end of the 18th century in France, a revolutionary storm is raging in Paris. The monarchy was abolished after the populace seized the Bastille prison in 1789. While the Jacobins led by Robespierre are arresting and sentencing nobles to death, the angry populace are demanding more nobles be sent to the guillotine. Percy Blakeney, an English aristocrat, dislikes the reign of terror by the French revolutionary government. He is saving innocent nobles from the daily executions and helping them to flee France. Although his daring rescue attempts are much talked about, he has been successful in keeping his identity concealed. Chauvelin, a member of the Committee of Public Safety of the French revolutionary government, is out to discover the identity of the Scarlet Pimpernel, which means a red star-shaped flower in England.