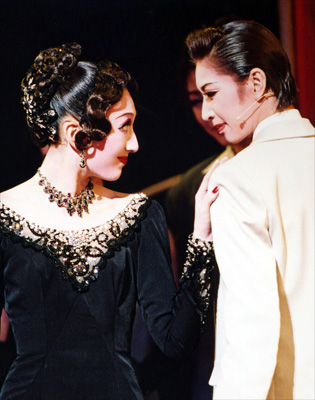 Based on Edogawa Rampo's novel The Black Lizard, which has had many movie and play adaptations. The Takarazuka version will be brimming over with period romance, set at the turn of the Taisho/Heiwa Eras. As the tale of thrills and suspense between the gloomy and reclusive great detective Akechi Kogorou and the master of disguise and female thief the Black Lizard (who is forever switching between western clothing and kimono) unfolds, it comes to a conclusion different from Mishima Yukio's version.

The play is set ten years after the end of the World War II, in Ginza, Tokyo's most fashionable downtown district. Former boxer Amamia Junichi comes to the Black Lizard nightclub to see its owner, Madame Midorikawa. He looks very tense and tells her he has killed a person, and needs to borrow money in order to run away. She reassures him by saying she has an idea for how he might escape capture.

Some time later, the club is filled with guests. In response to their cries, Madame Midorikawa dances, showing the black lizard tattoo on her back. A man catches her eye. He introduces himself to her as Akechi Kogorou and asks her to accompany him to a hotel to see her friend Sanae, whose father is the jeweler Iwase.

The next day, Akechi sees Iwase and Sanae with Madame Midorikawa. It is revealed that Iwase received a letter threatening to kidnap Sanae, and hired the brilliant private detective Akechi to keep her safe. Madame Midorikawa says the prospective kidnapper is only bluffing, and offers Akechi a challenge. If Sanae is abducted, Akechi must give up his detection business — unless he catches the abductor, in which case Madame Midorikawa will give him all her jewels. At first he refuses the challenge, but he becomes more and more intrigued and, finally, accepts.

Madame Midorikawa prompts Sanae to go into her room — where Amamia is waiting. Following Madame Midorikawa's instructions, he catches her and hides her in a trunk. He admits his nervousness to Madame Midorikawa, who shows him a newspaper article claiming that after committing homicide, he killed himself by jumping out a window. He's amazed by the thoroughness of her plans and admits it all seems like magic.

As they have arranged, Amamia carries away the trunk, while Madame Midorikawa disguises herself as Sanae. Iwase comes to find his daughter and is entirely taken in by the deception. They leave together.

Around midnight, Akechi and his friend Captain Namikoshi are waiting in the lobby, on the lookout for the abductor. For quite some time Akechi has been trying analyse what truly motivates him to solve crimes. He confesses to Namikoshi that his vocation for detective work is fading. They receive a telegram informing them that Sanae will be kidnapped at 2 a.m, and rush to Iwase's suite to find not Sanae but a dummy lying in her bed. Akechi steadies Iwase's nerves and asks him to permit Namikoshi to assist in the investigation.

Madame Midorikawa triumphantly declares that she has won. Akechi tells her that although he has failed to arrest the suspect, he believes Sanae to be safe — and that she is behind it all. In the middle of the confusion Sanae arrives, accompanied by a guard hired by Akechi. Now that Sanae, who according to Madame Midorikawa cannot possibly be there, is there, Madame Midorikawa can no longer conceal her true identity as the Black Lizard. She draws her gun and runs away, and Akechi runs after her. He's thrilled by this encounter with the infamous woman thief and feels he's rediscovering his passion for his work.

In the house of the Iwase family, Sanae is forbidden to go out and is behaving like a spoilt child. The housemaid Oshige and the other servants are puzzled by the change in her; she's not at all like the Sanae they used to know. In fact, she isn't really Sanae: she's a substitute brought in by Akechi.

Some days later, a sofa Iwase has ordered for Sanae is delivered to the house. Amamia outwits the tight security around the house by hiding in the sofa, and when the substitute Sanae is sitting on it all alone, he kidnaps her without knowing she isn't Sanae.

Madame Midorikawa has demanded from Iwase a fabulous jewel called the Star of Egypt in exchange for his daughter's release. He waits to give it to her in Ueno Park, where there are many vagrant children. She comes alone and wrenches the jewel from him, then gets rid of him by telling him Sanae has already returned to her home. But she fears that he may still come after her, and so, pretending that a villain is pursuing her, she asks a nearby shopkeeper to accompany her to a place of safety.

While walking, they discuss their pasts and discover they both lost all their parents, brothers, and sisters during the war. They find they share the same sort of sorrows. The shopkeeper is, in fact, Akechi; and as he watches her get into the car that has been waiting for her, he reflects upon how ironic it is to have uncovered the famous thief's innocent sentiments. He is now quite dedicated to winning her over.

Akechi locates the boat that is to transport Madame Midorikawa to her hideout, and stows away. She is sitting on a sofa in her cabin when she senses someone else is present and hears him speaking to her. She thinks he's hiding in the sofa, imitating the trick she invented herself for Amamiya to abduct Sanae, and calls in Amamia and has him throw the sofa into the sea.

When she returns to her cabin, Akechi appears before her disguised as the sailor Matsuko. Not knowing his true identity, she tells him how much she wanted to see Akechi Kogorou dead — and that now he is drowned, she realises too late that she was ardently in love with him...

Disclaimer: This synopsis bears precious little resemblance to the actual show but is all we've got.

Scene 1 : Prologue A
Cab-Girls march on the apron stage led by American Girl and American Boy.

Scene 2 : Prologue B
Men and women in tuxedos carry out the prologue.

Scene 5 : Tailor's Love
A tailor shows a variety of costumes.

Scene 6 : Astaire
Man S dressed like Astaire dances the duet with Cherry in pink dress under the Brooklyn Bridge. Shortly afterward, a woman in a blue dress enters.

Scene 7 : Follies A
Woman S dressed like Rogers comes before an array of gentlemen in tailcoats. She dances the duet with Man S in tuxedo.

Scene 8 : Follies B
Follies Gentleman S enters on the apron stage and sings.

Scene 10 : Finale A
Finale Lady S sings. The Takarazuka Rocket Girls perform a set of precision dances after singing several numbers with the singer at their center.

Scene 11 : Finale B
Performers sing and play the finale numbers with Finale Man S and Finale Woman S at their center.