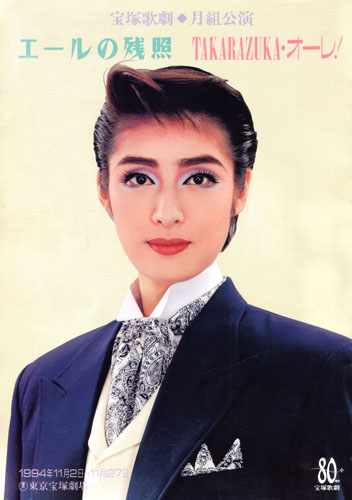 
WARNING!! MAY CONTAIN SPOILERS!!
The show opens with Walter in great coat and top hat, singing "Kaze no Shamrock" while the cast sings in the background and all of the major characters are introduced. Then the actual play starts, with us suddenly transported to 1920s India. There the British soldier Colonel Shamrock is saying farewell to the local ruler and his people, for he has received news that his father has died, and so he is leaving the army and returning home to Ireland to reclaim the estate. The local ruler gives him a parting gift... a manservant named Ravi Shankul. Walter tries to protest being given a person as a gift, but it soon becomes apparent that Shankul really wants to go with him.

They travel across Europe and enter Dublin. Dublin has changed since Walter left. He is shocked when he returns home in uniform and a young woman shouts at him: "British, go home!" The British army is abusing its control, and the people are discontent. Terrorist groups are springing up all over to protest British rule of Ireland. One of these goups, the Sword of Light, is led by Daniel McNeal, and his fiancee Rosey is a member.

Walter explains to his lawyer and the household staff that he is liquidating most of the estate, and will be releasing them from service. They try to argue, but everything is interrupted when a group of Daniel and his men burst into the mansion for cover. Daniel has been shot, and they're being followed by soldiers. They try to force help out of Walter and his men at gunpoint, but Walter gently explains that they have to ask nicely, and Joseph the butler says he only helps guests. A furious Rosey has no choice but to agree, and everyone is spirited upstairs just in time. The British soldiers enter and begin searching the house. They find huge amounts of blood on the entryway carpet. Suddenly, however, Joseph appears, limping, with a bloody rag wrapped around his thigh. He hurt himself and bled on the carpet, he explains. One after another, other servants appear with dripping wounds. At first the soldiers don't believe it, but when they check, they see that the wounds are indeed real. They excuse themselves.

Walter is shocked that his servants would go so far. They explain that they too are Irishmen and women, and they believe in the Shamrock family. Walter is tearfully overjoyed to hear laughter in the estate again, so long absent since his mother's death, and decides to keep them all on. The servants have one more surprise. They wheel in a young man, the younger brother Walter believed dead. Complications from Michael's birth had caused their mother's death, and his father in his grief had ordered the servants to get rid of the boy. They had hidden him and raised him all these years. Walter is ecstatic to be reunited with his younger brother. Rosey has watched all this from the second floor balcony, and bitterly turns away.

Time passes, and Rosey and Walter meet and Walter explains to her that violence only creates more violence, and terrorism is not the answer. She pretends to disagree; she believes in what Daniel is doing, though he is not the man she got engaged to so long ago. The terrorists eventually leave.

Later, there is a near-confrontation between the army and the terrorists. Alec, one of the members of the Sword of Light, has become an informant; revealing a plot to assassinate the new Governor General of Ireland while he is out fox hunting. Walter manages to diffuse the slaughter by throwing himself between both parties. He refuses to choose sides, believing in Ireland, but also having former friends in the British army. In fact, the commander of the Dublin forces is his former friend, Charles Russel. Charles has turned into a stranger, though, and become cruel.

A great supply of weapons intended for the British army has vanished en route, and it was said that their ship sunk in a storm. One day Shankul took Michael out to a remote island and there in an abandoned castle Michael found the weapons. Michael brought some back, but Walter orders them to return them to where they found them. Weapons and violence are not the answer. Somehow Daniel learns that Michael knows where the weapons are, and he sends a reluctant Rosey to find out the information.

When Michael turns up missing, and Walter learns that Rosey was the last one with him, he knows that she's after the weapons. Having a vague idea that they're at the ruins, he decides to go in search of them. Meanwhile, worried because Rosey hasn't returned, Daniel also leaves his men to search for her. Michael reappears, and admits to his brother that he told Rosey where the weapons are. Walter hurries off into a gathering storm to row out to the island. He finds Rosey at the ruins, and Daniel shows up shortly after him, gun drawn. Walter is always getting in his way, he declares. Rosey protests that Walter saved Daniel's life, and then collapses from a fever. Walter begs Daniel to set aside his antagonism so that they can keep Rosey alive. He goes looking for firewood, while Daniel keeps Rosey warm. While looking for firewood, he finds the weapons cache, and hides a stick of dynamite in his coat. Once they have a fire started, Walter and Daniel talk. Walter asking if Daniel loves Rosey — "Oh, but of course you do," he says with a self-mocking smile, "you're engaged, after all." He then questions the kind of life Daniel is putting Rosey through.

"What we do is none of your business; you're a third party," Daniel says coldly.

The self-mocking smile returns. "Oh, yes, I am a third party, aren't I?"

Walter leaves to collect more firewood. Left alone with a still-sleeping Rosey, Daniel confides to her that this isn't the life he would have chosen for her, or himself, but there's no going back now. His path is chosen. Resolute once more, he draws his gun and runs off to find the hidden weapons cache. Walter returns just as he's running off, and shouts angrily after him for abandoning Rosey. Then he takes Daniel's place and keeps her warm until she wakes up. Once she wakes, she pulls away, and Walter explains that really Daniel had been holding her. She asks where Daniel has gone, and Walter tells her. She murmurs that she remembers being held in her dreams, and then woke up to having him hold her... She admits that his ideals are the ones she really believes in.

Daniel returns with several extra guns. He has found the cache. Walter picks up a burning branch and pulls out the dynamite. He is going to throw himself on the weapons cache rather than let it be used for more murder and violence. Daniel draws his gun, but then... Rosey draws hers as well, and points it at Daniel. She explains that she won't let him do this; won't let him go back and get the others and retrieve the weapons. Walter watches in horror as the two aim guns at each other, then Daniel lowers his and turns away, explaining he'll be back with the others. "I mean it, Daniel!" Rosey shouts at him, but he keeps walking. She fires. Hit, Daniel staggers, then turns and shoots her in return.

Walter tosses aside his unlit dynamite and grabs Rosey, but she's slipping away. A wounded Daniel staggers to his feet. Walter shouts at him to stay still and wait for the others to arrive, but the wounded man admits that he has been wrong, and he's going to do what he can to make things right. He picks up the stick of dynamite. Unable to leave the dying Rosey, Walter shrieks at Daniel to stop, but the man lights the dynamite and disappears into the cache. An explosion lights the sky as dawn finally breaks.

Walter's men arrive first, then Daniel's. A devastated and bitter Walter shouts out to them the truth, but no one is given time to mourn, because the British arrive. Walter faces them, asking if Charles intends to take it out on him as well? He begins singing "Danny Boy" softly, and walks toward the soldiers. They beat him to the ground, but he gets up again and again. The others join him. The soldiers keep beating them down, and they keep standing up again. "Just like old times, Charles," a gently smiling Walter says. "I'm glad I could see you again." Unnerved, the soldiers run away.

Walter collapses, then struggles back to his feet again and picks up Rosey's body. He asks for some time alone with her. He talks to her about how she had such a hard life... then: "I never told you that I loved you, did I, Rosey? How could I forget the most important thing? .... I love you, Rosey."

A debonair gentleman dressed in a formal white tail coat sings on the Grand Staircase. Scenes from some of the famous shows which Takarazuka staged abroad.

With a globe of our world as a backdrop, groups of dancers representing various countries each dance around one singer.

An elegant chap clad in a black tail coat sings on a gas lit stage. A charming couple sings duet while other men dance. The French tricolor and the Eiffel Tower enthuse the dancers with the romantic joy of life charavteristic of Paris.

A singer belts out a song in the Russian tradition in the famous Moscow Square.

People talk about what London means to each of them. They share very different images of the British capital — the Beatles, Andrew Lloyd Webber, and Sherlock Holmes among many others. Takarasiennes returning from London present a dance number and then talk about their memories in London.

From a small number of people a crowd gathers to watch a pair of brilllianr dancers lead other couples in a thrilling tango.

Colorful masks decorate the stage and create a carnival atmosphere which excites the dancers to a wild fever pitch.

Graceful, exotic and traditional Thai dancing which has for centuries been performed in the royal palaces touches the hearts of all who are privilaged to see it.

One New York pair inspires other couples to dance among the skyscrapers in true Big Apple style.

Gentlemen in black tail coats display their pride in the long Takarazuka tradition by strutting on the Grand Staircase.