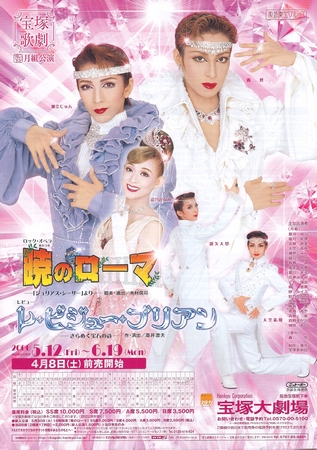 Available on DVD: Yes (DVD release date 8/5/06) & VHS
DVD Scene/Music Cut: Yes
Scenes 9, 12-13, and 14 Les Bijoux Brillants were removed from the main video and placed in a separate chapter without sound during the songs.

In ancient Rome, people are in a festive mood over the victory and are there to praise Caesar in the amphitheater. As soon as they see Caesar's adjutant general Antony putting a crown onto Caesar's head, people's feelings suddenly change, and they stop praising Caesar, indeed falling into a deadly silence. The Romans who had done away with the monarchy and had won the Republican form of government are horrified to see the very figure of a king. Caesar, who is conscious of such feelings of the Romans, refuses the crown. However, some Romans suspect that Caesar, deep in his heart, wants to be king and rule Rome. Brutus is one of them. Each and every one of the Romans recognizes that Caesar is really the King of Rome. Cassius, a friend of Brutus', thinks about assassinating Caesar in order to prevent Rome from coming into Caesar's hands. He asks Brutus to join him.

Caesar catches sight of Brutus who is still in the amphitheater. Caesar thinks that Brutus is a promising young man and makes him his favorite. Just when he calls out to Brutus, Cleopatra suddenly arrives accompanied by Carmian and other ladies-in-waiting. She has come to Rome to see Caesar bringing along with her a baby born of Caesar and her. The conversation between Cleopatra and Caesar makes Brutus suspect more than before Caesar's true ambition. He cannot help but ask Caesar if he is king. Caesar replies that he is not king but it is he who governs Rome. On hearing that reply, Brutus questions Caesar if he will continue the Republican form of government, which is ideal for Rome. Caesar tells him that the ideal changes with the times, revealing his vision that Rome needs a leader now. Caesar is planning that Rome will become a wealthy country and is determined to make his vision come true by himself. Brutus has to make a difficult choice between his respect for Caesar and his love for Rome.

Brutus comes back home and finds his wife Portia. She notices that he is seriously troubled. She asks him what he loves most. He answers that he loves his wife, Rome and Caesar's greatness. She points out that he does not love Caesar but fears him. After arguing with Portia, Brutus is convinced anew that he loves a Rome that belongs to everybody and is taken care of by everybody.

In Cassius' house, the men who want to assassinate Caesar are waiting impatiently for Brutus. At last, Brutus arrives. They all promise to kill Caesar in the Senate.

Caesar's wife Calpurnia has an evil dream in which her husband is covered with blood. She has feelings that something evil is going to happen. A fortune-teller tells her that Caesar is in danger and is most ill fated that day she is meeting with the fortune-teller. She tries hard to stop Caesar from going out. However, he goes to the Senate ignoring her wish that he should not go.

Some time later at the Senate, Brutus and other conspirators come closer to Caesar. One of them stabs Caesar. The others follow him. A final blow pierces Caesar in the heart. Brutus, Caesar's favorite, who Caesar thinks has a bright future gives Caesar the coup de grace. Caesar says, "Even you, Brutus! Then, it's all right." He dies smiling.

The next day, Brutus addresses the Romans who are upset by Caesar's assassination. At first, he praises Caesar's greatness and courage, and then, tells them that Caesar had an ambition to make Rome his own. He tries to convince the Romans that there was no other way than assassination in order to stop Caesar's ambitions. The Romans shout out that they agree with Brutus. Then, Antony starts his speech. He not only eulogizes Caesar but also moves the Romans into believing that Caesar loved them very much. He reminds them that Caesar gave all his war trophies to the state and that he shared the pinch of hunger and despair with the poor. And, he reads off Caesar's will, by which all his fortune would be distributed to all the Romans. The Romans are much impressed by Antony's speech. Although only a short time ago, they had approved of Brutus' conclusion of Caesar, they now say in tears that Caesar was the father of Rome. They look with hostile eyes at Brutus who has killed their father.

Brutus finds himself on the side of the accused. Portia has gone mad with agonies of regret and fear. She asks Brutus to believe that she really loves him and dies in his arms. Before Brutus in despair, Caesar's ghost appears and tells him that all's well that ends well.

Brutus' friends are killed one after another by Antony or Caesar's adopted son Octavian. Brutus looks back upon the past. The faces of Cassius, Portia and Caesar come across in his mind. They all loved him. He is sure that no one is loved more than him and feels satisfied with his life. He ends his life by himself thinking of all the people who loved him completely.


Scene 1 a-c : Prologue 1
As soon as the curtain rises, Bijou-Women and pretty Bijou-Women appear. Led by music and under a strong light, a gorgeous necklace comes down from above. In the middle of the stage, Bijou-Man S appears and sings the theme song.


Scene 3 : In Front of the Curtain
A gentleman walks around on the forestage while singing and asking, "Which do you like better? A romantic love or a shining diamond necklace?"

Scenes 4-7 : Jewels in the Night a-d
In the evening, a young man named Henri and a young woman named Yvonne enter the streets of a port town crowded with a great variety of people walking around. Yvonne catches sight of a large necklace made of jewels in the center of the window of a small antique shop. She runs toward the window, gazes hard at the necklace and is impressed by its beauty. Henri sighs over the fact that he cannot buy it for her.

Scene 8: Climax － Emerald －
Emerald-Man jumps out of a jewel-case from a bag and invites us to a faraway land that shines in shades of green.


Scene 9:Climax － Big Diamond －
Two gentlemen unconcernedly stand before the biggest diamond in the world in a jewel museum at midnight.

Scene 11: Climax－ Black Diamond －
Black-Diamond-Man appears and invites women to sing together with him.

Scene 12 - 13: Climax－ Happy Together 1 - 2 －
A woman wearing an engagement ring with a huge diamond comes onto the stage. Happy-Singers appear one after another and sing in succession.


Scene 14 - 15: Tango of Reminiscence Tango of Flaring Passion
In a tango club in Buenos Aires, a gorgeously dressed woman is dancing with a young man. A man looking for her comes into the club. The man and woman quarrel. She throws her ruby ring at him and leaves with the young man. The man sings and dances the tango driven by burning jealousy.

Scene 17: Finale a
Five Bijou-Young-Men appear and dance while singing.

Scene 18 a - b: Finale b - c
Blue-Sapphire-Young-Man sings while men and woman dance on the grand staircase.