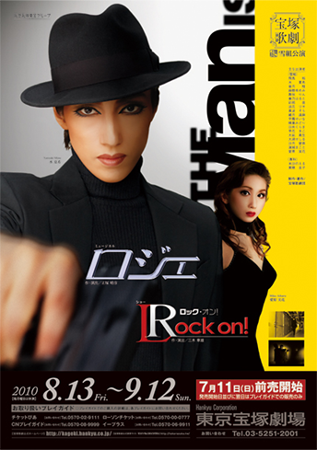 The Second World War has entered its final stage. A family in war-torn Europe is suddenly and brutally attacked, with only a small boy left alive to tell the tale. Roget Jardin swears an oath that he will not rest until he has his revenge on the man that murdered his parents and sister in front of his eyes.

More than 20 years have passed since the end of the war. War criminals fleeing from justice have fled to the four corners of the globe. An organization of some sort is helping these war criminals stay on the run and successfully avoid detection. Roget is sure that if he can uncover the workings of this shadowy organization he will finally be able to track down Schmidt, the man that murdered his whole family. After joining the Foreign Legion and military intelligence, Roget becomes a detective with the International Criminal Police Organization, or Interpol as it comes to be known. Roget teams up with Bachelet, a hunter and former member of the Jardin clan who raised Roget as a boy. Together they delve deeper and deeper into the investigation.

Roget and his colleagues get wind of a gun-running operation and the word is that the wealthy investor Gerhard is behind the deal. Roget becomes convinced that Gerhard is involved in some way with the organization helping war criminals escape justice. Roget knows that he needs to get close to Gerhard so he is determined to find a way into the warehouse used for the gun-running and to this end he meets up with Leon, an old friend now working as a detective with the Paris City Police Department. Roget needs the help of the police but without any solid evidence the police are unable to launch an investigation. More determined than ever to uncover the organization behind these fugitive war criminals and thus wreak his revenge, Roget enters the warehouse without any warrant from the local police in order to find some evidence to prove his theory right.

Inside the warehouse Roget finds countless weapons that have been smuggled into the country. Whilst he is gathering evidence he notices two people being led into the warehouse by another man and Roget just manages to conceal himself in time. Roget continues to observe their conversation silently until the gentleman known as Kaufmann, holding the pair at gunpoint, utters the name 'Schmidt'. Roget instantly appears and confronts Kaufmann who, rather than betray any information to Interpol, chooses to take his own life.

Roget learns that the couple are Leah and Jakob and they work as investigators with the Wiesenthal Organization. Their job is to hunt down Nazi war criminals all over the world. They had chased down Kaufmann, one of the war criminals on their list, before being discovered and abducted by the organization.

Roget is able to confirm the existence of the organization by listening to what Leah tells him. But is the 'Schmidt' that Kaufmann uttered the same man that Roget is looking for? Roget is convinced that he can find a link between the gun-running black marketer Gerhard and Schmidt.

Roget is kept alive by his burning desire for vengeance for a family slain. Leah is determined to catch and punish every last war criminal to ensure that war does not happen again. Roget and Leah are both driven and motivated by the past, what new secrets will their passion uncover as they begin to investigate together?

Rock On! is a revue that sends a message of excitement to all the beating hearts of the audience. Natsuki Mizu continues to connect with the audience using her brand of pulsing excitement, and when the final curtain falls on this, her final performance, everyone knows that she has given her all while on stage. Natsuki Mizu is sharp and gorgeous as she 'Locks on!' (never stops pursuing) her dream, a dream world that can only be realized through a Takarazuka musical performance!