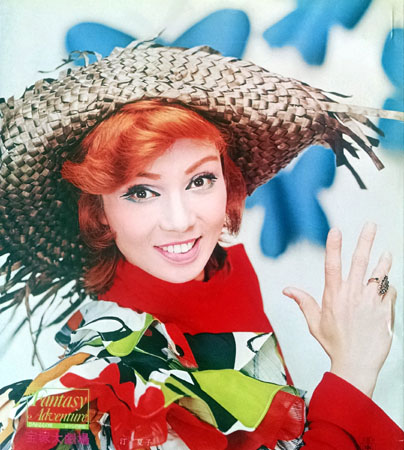 Poem of the White Heron:


Poem of the White Heron

Poem of the White Heron

Captain Tachibana Mitsunobu has wandered away from his friends and finds a lake shore never before disturbed by man. The sun is just rising, and the snowy shore is wreathed in mists. In the mist, Mitsunobu watches white herons dance. Then a black heron comes and disturbs them. His friends arrive, and he tells them that he is certain that he saw the form of his fiancee Yuu-hime dancing with the swans. Yuu-hime has been missing for three months, and Masataka wants to let his sister go, believing her dead. He argues with Mitsunobu and Kiyotada. The friends depart first, and when he is alone, Mitsuhide meets the coldly cruel King of the Demon World. The Demon King tells him that he has stolen Yuu-hime, and changed her into a white heron. If he hopes to ever get her back, Mitsunobu must promise to meet him on the next full moon at the Waterfall of the Dragon God....

Kiyotada reminisces about Yuu-hime, while Masataka again tries to get his friends to leave her memory be. Spring has arrived, and with it, the day when Mitsunobu and Yuu-hime were to have been wed. Mitsunobu's parents join them and also remember the sweet young woman. Mitsunobu's younger brother Yoshimichi, mentions how quiet and changed his brother has been lately....

In the midst of the celebration and dancing at the banquet, the Demon King arrives with his sister Yuri-hime, who looks exactly like Yuu-hime. Yuri-hime dances, and Mitsunobu is snared by her whiles. He embraces her, and she disappears. The Demon King mocks him for falling for things he can never have.

Scene 4 - Mitsunobu and the Demon King

Mitsunobu sings that he will trust in his heart, while the Demon King mocks his humanity.

Scene 5 - The Waterfall of the Dragon God

Deep in the mountains, snow lingers around the waterfall. Still enchanted into a white heron, Yuu-hime sings while other white heron dance around her. Mitsunobu arrives, and once he has assured himself that it is Yuu-hime, he embraces her. But Yuu-hime warns him that he must leave at once because the Demon King's magic is too strong. He refuses. The Demon King arrives to mock him some more, and then sends a powerful blow at Mitsunobu. Yuu-hime steps between them and takes the blow. Mitsunobu tells the Demon King to watch closely, because this is the power of human love. He takes Yuu-hime into his arms, and jumps into the waterfall. The Demon King is flabbergasted to learn how strong human love really is. Mitsunobu and Yuu-hime reappear to sing and dance together once more.

Brazil, the sunny country where cities and jungle mix.

Men and women dance in front of an electric sign saying: "Monsieur Papillon."

Three young men in straw hats come out onto the Silver Bridge and sing.

The office of the bus terminal. A tour guide brings in three customers (Holst, Louisa, and Amalia) and introduces them to the bus director. They talk about the bus driver nicknamed "Monsieur Papillon."

The stage spins, bringing Carlos's bus to the bus stop.

Scene 5 - Leave Your Holiday to Me!

Carlos's boss informs him he will be driving the three guests around for the three days of the carnival. Carlos had been expecting a holiday and protests, but the ladies talk him around.

11 show dancers dance and sing in front of the blind.

At the nightclub Corcovado, Aminta and Conception dance and sing to entertain their guests. Aminta lures Carlos off to dance, while a door boy whispers to Louisa and leads her out of the club. A drunk Carlos eventually stumbles out of the club, Pedro on his heels.

Louisa has been lured out by the boy telling her her father wants her, but it was actually a ruse so she could be abducted! Her bracelet falls into the ally as she is taken away, and her sister Amalia discovers it. She and Holst realize her father's enemy the mob boss Gonzales must have taken her sister. They scuffle with his underlings and escape. Meanwhile, Carlos is extremely loopy and making no sense. Eventually his friend Pedro realizes he has been drugged. They head for Aminta's villa, suspecting she knows where their charges have run off to.

Everyone is gathering at Aminta's place, where we learn the owner and manager of the Corcovado are working for Gonzales. Carlos and Pedro manage to sneak in by pretending to be door boys and helping Aminta and her sister with their bags when they arrive at the well-guarded door. We learn Aminta and Gonzales are lovers. Everyone dons masks for a party. Holst and Amalia arrive and grab Louisa and run. The villains chase them. They all escape but Carlos, who is held at gun point by Aminta. Aminta asks him if he's in love with Amalia, which he vigorously denies. All his love is for the Brazilian Arurora, a rare and mythical butterfly in the Amazon that he is determined to find. His rapturous description wins over Aminta, who tells him to escape to the Amazon, find the butterfly, and return to her.

Holst has safely returned the two girls home to their father Don Inigo. Carlos and Pedro show up shortly after that. Amalia asks Carlos who he loves more: Her or the butterflies. With Pedros' help he dodges the question, although Amalia announces she will follow him into the Amazon. Don Inigo is amused to see the young man so enraptured by the Amazon. Carlos in turn reveals that Pedro is obsessed with finding El Dorado. While Pedro is in raptures, Carlos sneaks off. When they realize, everyone is in an uproar. Pedro takes off after him, while Amalia is restrained from going as well.

There is an indígenas village hidden near the Amazon. There, a young lady, Elba, is fretting because the elders will not let her dance, since it is something only men do, or the gods are angered. Pedro arrives and the elder tell him to take Elba with him. He agrees, but says he will take her on his way back, as first he needs to go find his idiot white friend and rescue him. He leaves, and Elba brashly announces she will follow him.

In the forest, Carlos is being stalked by a giant snake. Just as it is about to swallow him, Pedro shoots and kills it. They great each other, and then Pedro points. A flock of aurora butterflies are in flight. Carlos takes off after them. Pedro tries to follow, but Elba grabs him from behind. He wrestles out of her hug and takes off. She follows.

A radio announcer tells the news that Carlos has returned with a live aurora, and has caused a sensation. Carlos is overwhelmed by all that has happened.

Aminta refuses to perform, instead heading out to find Carlos. Her underlings and sister warn her she's going to anger Gonzales, but she doesn't care. She tells Conception to take Gonzales as her lover, and heads out. Gonzales sends them out after Aminta and the priceless aurora butterfly.

At his mother Flora's house, Carlos has decided not to sell the aurora for money. Elba confronts Pedro, telling him it is time to return to the jungle. Pedro replies that he won't until he has money from El Dorado, but Elba tells him that money isn't what is important. Aminta arrives and offers to help Pedro with his expedition. He tells her he doesn't trust her because of her ties to Gonzales, and she replies that she loves Carlos more than life. Pedro replies that Carlos is in love with Amalia. Aminta says she will show him what a real woman's love is, and that she has a a rendezvous with him that evening at 8. Amalia overhears and is furious. She accuses Pedro of stabbing his friends in the back. Aminta laughs and leaves. Somehow in all the muddle, Elba decides Pedro is cheating on her with Amalia and storms out. Holst goes and drags Carlos out of his room, and Amalia accuses him of setting up a date with Aminta behind her back. Carlos says it couldn't be helped, since she had a pistol on him at the time he made the promise. Holst produces a note from Aminta, and Louisa accuses him also of cheating. There is a kerfuffle, but eventually Louisa and Amalia are placated.

In the garden, later, Flora and Amalia are kidnapped. A threatening note comes, demanding the aurora butterfly in return for the women. However, Carlos and Pedro realize that they have been snatched by the indígenas, lead by Elba. When confronted, Elba admits she had misunderstood and was jealous. everything is sorted out, and Carlos decides the best place for the aurora is in the village zoo.

Aminta is again refusing to go on stage, but Trick shows her a dress and letter from Carlos. In it, Carlos explains that the aurora is staying at his home village, and that he will be marrying Amalia. In return for his broken promise, the dress, designed by Holst, is the "Aurora."

Holst sings of his love for her while Louisa dances with 8 young men.

32 indígenas women dance while Pedro and Elba dance among them.

Carlos and Amalia sing and dance, then Carlos dances in front of a troupe of otokoyaku. The parade to close the show.