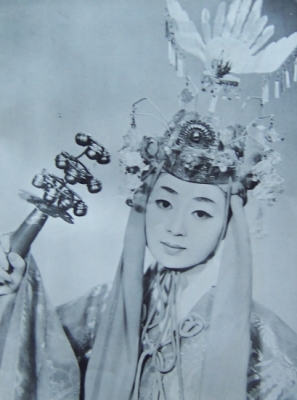 
ACT I. Hana No Odori (Dance of Flowers)

SCENE 1. Hana To Niji No Takarazuka (Floral andRainbow Takarazuka)
The beautiful Takarazuka girls, costumed as MAIKO (apprentice Geisha girls) and SAMURAI (young warriors in Wakashu style) dance and introduce themselves, their art and music while singing about the flowers, colors and glories of the City of Takarazuka in Japan.

SCENE 2. Bijo To Sanzuko (Beauty and the Bandit)
An elegant Geisha girl, carrying her valuables in a brocaded bag, is assaulted by a bandit. He, however, is taken with her beauty and desires to attain her as well as her posses- ons. After eating, drinking and dancing together, she proves woman's authority and man's weakness for beauty.

SCENE 3. Iwato Kagura (Masked Dance at Celestial Cave)
This mythological tale takes place in Miyazaki Prefecture on the Island of Kyushu. According to legend, the Sun Goddess, after a quarrel with her brother, hid behind the Great Rock at the Celestial Cave, thus throwing the entire earth into total darkness. The other Gods called upon Uzume No Mikoto, a voluptuous young Goddess, to stage a dance in hopes of bringing the Sun Goddess out of hiding. Surrounded by her Miko (virgins in service of a shrine), she danced so magnificently and the watching Gods shouted their approval so forcefully that the Sun Goddess, through curiosity, appeared outside the caved, thus restoring light to the earth.

SCENE 4. Itsuki No Komoriuta (Lullaby)
"Lullaby of Itsuki" is sung in an old Kyushu dialect and danced by two mothers with their babies strapped on their backs and covered for warmth with a NEN-NEKO, a wide, loose, cotton kimono.

SCENE 5. Bo Odori (Military Drill)
This military drill is still very popular in the districts of Kumamoto and Kagoshima on the Island of Kyushu where chivalry is greatly in evidence even today. This exciting dance, performed to an old song of war, presents youthfulness, vigour, and brightness as the warriors are trained to use their long sticks, sickles and wooden swords.

SCENE 6. Kyomai (Geisha Dance from Kyoto)
Three Geisha girls from Kyoto dance to the ballad of Higashi Yama and demonstrate their delicacy in the intricate handling of fans.

SCENE 7. Okinawa Odori (Okinawan Folk Dances)
These folk songs and dances are authentic and still performed in Okinawa. The first, NISHIJO BUSHI, was created by farmers rejoicing over the rich harvests during the Autumn Festival. HAMACHIDORI is a traveler’s recollections as he remembers his old home in Okinawa. HATOMA BUSHI comes from the Island of Yaeyama and also symbolizes joy over a rich harvest.

SCENE 8. Shan Shan Uma (Jingle Horse)
This folk song originates in Kyushu and is traditionally sung by a bridegroom as he takes his wife home for the first time. Newlyweds on the Island always worship at the UTA SHRINE and this song is heard as the happy couple climbs the hill near the Shrine.

SCENE 9. Ya Kyu Ken (Baseball)
The popularity of baseball in Japan inspired this song and dance. It is a household game and everyone in Japan sings and dances this at parties, festivals and gatherings. A translation of the song would be “…first we play baseball, then we play KEN to decide who wins…” KEN is best described as the childhood game of scissors cutting paper, paper covering stone and stone breaking scissors.

SCENE 10. Miyazaki No Usu Daiko (Mortar Drum Dance)
In ancient Japan, warriors performed this dance which was dedicated to the Gods in hopes of bringing about a much-needed rainfall. With mortar drums on their chests and long banners on their backs, they engaged in this light-footed dance of formations and changing files, accompanied by four brass-gong bearers.

SCENE 1. Haru no Hana (Flower in Spring)
A young man sits under Wisteria trees dreaming of his deceased love and fondling her kimono. She seems to appear and dance with him, only to disappear again among the Wisteria branches, leaving him alone with his dreams.

SCENE 2. Natsu no Hoshi (Stars in Summer)
Since ancient days, Japanese people have celebrated the Star Festival on July 7th of every year by hanging seven different colors of paper on branches and by writing their wishes on bamboo leaves. Here we see the seven colors dancing under the shining stars of summer.

SCENE 3. Aki No Tsuki (Moon in Autumn)
A harvest festival is in progress – the branches of the persimmon are bending low with the ripened fruit, the moon is bright and the music gay. A girl, wearing the mask of OKUME (traditional village girl) is pursued by two men wearing the masks of HYOTTOKO (village clowns). While they are fighting for her affections, she falls in love with a young man wearing the mask of AMANOJAKU (handsome village boy). The two men are left alone, under a moon which seems to be laughing at them.

SCENE 4. Huyu No Yuki (Snow in Winter)
The snow is gently falling and the Snow Spirits dance quietly. But their movements son become more violent as a blizzard develops. A badly wounded Snow Heron (often referred to as the Swan of Japan) is exhausted by the storm and falls to the ground. Knowing his last moments are at hand, the Heron forces himself to dance while remembering past happy days. When the blizzard subsides, the Heron, mustering his remaining strength, tries to continue his dance but is too weak from loss of blood and he dies. The snow gently and silently covers his body.

SCENE 1. Momiji Gari (Maple Hunting)
While admiring and gathering autumnal leaves at Togagushi Yama, a brave young Prince called Tairo-no Koremochi meets a beautiful young Princess who, with her handmaidens and attendants, is also admiring the colors of Autumn. The Princess invites the young man to drink “sake” with her. He is entertained by the handmaidens and as he relaxes and begins getting drunk, the eyes of the Princess start to sparkle mysteriously, her movements become course and cruel and she turns into what she really is – a She-Devil living in the forest and luring young men to their death. In a dream (sleep is symbolized by covering the face with a fan), the Prince visualizes Mountain Gods all about him and when he awakens he sees the Princess (now changed to the She-Devil in classic evil make-up) trying to attack him. The Prince and the She-Devil then battle for their lives.

SCENE 2. Mitsumen (Three Masks)
The most disciplined stage technique is called for in the presentation of MITSUMEN. While the performer wears the OKUME (Traditional theatrical female) mask, she must express grace and sweetness; while wearing the OKORI (angry, with irate features) mask, she must express strength and bad temper. With these two expressions must contrast the HYOTTOKO (a clown who is simple and stupid) mask, calling for comic dancing. The personality of the performer changes with each mask, as she tells the story of a girl trying to choose her mate.

SCENE 3. Hana Gasa (Flower Umbrella Dance)
Songs and dances glorifying the Japanese Umbrella. KASA ODORI NO TOTTORI is a dynamic dance performed by powerful men from Tottori Prefecture with extra large umbrellas. Though this dance was created 300 years ago, it is still performed at Festivals, SANGAI-GASA (three-tiered umbrellas) is performed during festival processions in honour of Shinto Shrine. EHI GASA (pictorial parasols) are hand-painted and used by little girls in traditional little girls’ kimono and hairdo. SHIDARE GASA symbolizes rice blossoms and originates in Hiroshima Prefecture where it was first performed 100 years ago.

SCENE 4. Shishi To Chocho (Lion and Butterflies)
A lion is awakened from his sleep by two annoying butterflies. The Lion Dance, performed in full ancient style with traditional costume and make-up which dates back to the first Noh plays, is one of the most difficult and certainly the most highly respected presentation in Japanese theatre.

SCENE 5. Okuni Ohzume (Finale)
Okuni, a famous temple dancer, broke tradition in 1586 by performing her dances for the public in places other than Shrines and Temples. Her particular art proved very popular with the people and she soon expanded her company to presenting not only religious dances and chants, but NOH plays set to music and performed in mime. This was the start of Kabuki, Japan’s national theatrical art form. However, in 1629, a royal order forbade women from appearing on a public stage and Kabuki was taken over by men. OKUNI OHZUME, as danced and sung here with flower spears and umbrellas, is Takarazuka’s tribute to Okuni.

Per ad in another program from the same year, the troupe (“troupe composes forty two actresses and ten staff members”) would be “Embarking from Yokohama aboard the N.Y.K. Trans-Pacific liner S.S. Hikawa Maru on July 26, the troupe will make port at Vancouver on August 7" and would visit a “total of 30 cities on the American continent.” They would return to Japan, via Hawaii, by air on November 19th.