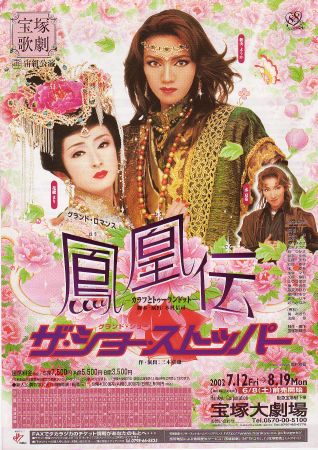 Legend of the Phoenix:

Act 1 A : The Aria of the Dawn
Light is born in the dark, and it dawns. A melody reminiscent of the native Africa sounds like a beautiful aria.


Act 1 B : The Aria of the Earth
An exotic rhythm joins the voice of the singing people so that the voice changes into a soul-stirring song.


Act 2 : Blues
In a big city made of steel, men sing their sorrow under the guise of blues. Blues are born.


Act 3 : Jazz
When Lady Liiberty smiles, the world enters a new century and a new epoch comes along. People catch a new music with their whole body, yielding themselves to jazz.

Act 4 : La Fontaine Lumineuse
In 1889, at the occasion of the World Fair in Paris. Amid the crowd enjoying an event illuminated under the night sky, a young man encounters a femme fatale.


Act 5 : Paradise
In a paradisaical man-made tropical rainforest, the young man looks for the femme fatale amid the pretty women.


Act 7 : Dark Eyes --- Russian church
The young man reaches a restaurant that looks like a Russian church. He meets a handsome young woman (the femme fatale) within a room enclosed with a mosaic wall, and falls in love with her. They dance tangos by themselves. Then, the femme fatale goes away alone, leaving him behind.

Act 9 : Venice --- Carnival
The young man strays in Venice, the city of water. An empty gondola floats down. A beautiful woman appears in the gondola. The young man falls in love with Giulietta, a phantasmal woman, and is drowned. The two disappear into the water.


Act 12 : Havana --- Carnival B
As women join the men, these men and women of passionate Latin character perform dynamic dances.


Act 14 : Showstoppers
Many other showstoppers flood the Grand Staircase. A hard and enthusiastic finale in rock rhythm starts.