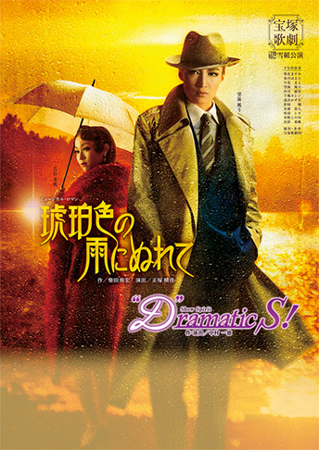 Set in 1920s Paris, this psychological romance follows the intersecting lives of four people: Claude, a young nobleman who does not lose his sense of self despite having experienced the horrors of war; Sharon, an otherworldly woman whom Claude begins to fall for; Francoise, a girl yearning for Claude herself; and Louis, a gigolo who is also enamored with Sharon. The drama's undulations are expressed early on in the prologue to tango music which was en vogue at the time.

After its debut in 1984 with Takashio Tomoe and Wakaba Hiromi, this exquisite drama was repeatedly restaged. This time, it will be revived as the debut performance for the new Top Combi of Snow Troupe, Nozomi Fuuto and Maaya Kiho.


Duke Claude de Bernard returns home exhausted from World War I. In the autumn of 1922, while walking in the Forest of Fontainebleau, he comes across an incredibly beautiful woman named Sharon Kazatti. Soon joined by ladies and gentlemen coming out of a soiree, she slips away out of his sight. Claude utters in spite of himself that she is a woman of sublime beauty. Hearing Claude's exclamation, a young man tells Claude that she is only a mannequin, not worthy of his praise and belonging to a world other than his. The young man's name is Louis Valentin and he is a gigolo. It seems that Louis cares for Sharon as well. Claude denies Louis's assertion, saying that she also has a soul just like him. A strange kinship grows between the two as they find that they both are attracted to the same woman. They decide to fairly compete to win Sharon's heart.

This performance delivers a number of “show scenes” depicting the charm of the Snow Troupe.

As a National Tour version to which "D" is the newly added keyword, please look forward to a "Dynamic" and "Dramatic" show centering on Nozomi Fuuto, who will lead a reborn Snow Troupe.