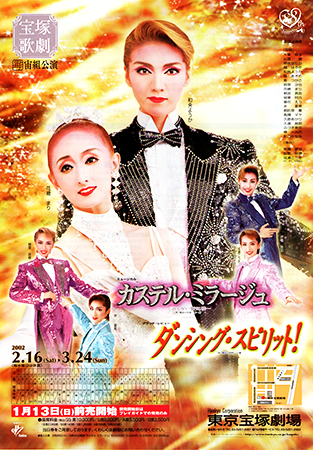 †Due to retirements after the Grand Theater performance (see below), some role changes were necessary.

Richard Taylor, a magnate of the newspaper industry, is notified that Leonard Ruby, the owner of Hotel Blue Bird in Las Vegas, has just died. He mourns the death of the angel of the underworld, a man who had been longing for a neverfading mirage.

In the poor quarter commonly called Hell's Kitchen of the West Side, Manhattan, New York, Madame Doudinskaia's open-air dance class meets on the street. One day, Frank and his gang of boys of Italian origin come to the class to take Joe away while he is dancing. This is because Joe lost in gambling and owes them money. Leonard offers to bet Frank the sum Joe owes them in order to pay off Joe's debt. Eva-Marie hands Leonard her pendant of Minerva, the goddess of victory, as an amulet. They shoot craps and Leonard wins. Vexed, Frank challenges Leonard to Russian roulette. Leonard pulls the trigger in the last turn. However, he is not shot for the revolver is not loaded. Antonio, boss of the gangsters controlling the quarter, has been watching the game. He is much impressed by Leonard's nerve and tells Leonard to call him whenever he needs his help. When Leonard gives the pendant back to Eva-Marie, she asks him to keep it as she is going back to Italy with her father. Her uncle has become a Black Shirt and has found a job for her father. Leonard goes home and finds the landlord Wells demanding his mother Lucia to pay up the rent. He then decides to see Antonio in spite of his mother's anxiety.

A decade after joining Antonio's gang, Leonard becomes the manager of a casino on the East Coast and shows his competence in running the business. Now Antonio tells him to make inroads on the West Coast, and also to oversee the Mafia of Chicago led by Gambino so far beyond Frank's control. Leonard heads for Hollywood, looking forward to seeing Joe who has become a star of musical films.

Leonard and Joe meet again after a long separation at the Taylor residence where a charity party to save European War orphans is taking place. In the course of the party, a singer named Arianne who was discovered by Taylor at the opera house in Monte Carlo is introduced to the guests. The singer is none other than Eva-Marie, who has grown up into a beautiful woman. Leonard shows her the pendant in excitement, and his behavior gets on Taylor's nerves. Taylor regards Leonard with contempt and says that he belongs to the underworld, and that he cannot open a casino in California anyway because it is banned by law. Leonard defiantly declares that he will open a casino in Nevada, and incurs Attorney McGovern's animosity. Then they hear the news that the Allied forces have landed in Sicily and the Italian forces are retreating.

At the charity party, Di Stephano, an Italian duke, asks Leonard to build channels to smuggle objects of art out from Italy. Leonard refuses the duke's request on the grounds that to help Mussolini make funds by selling such objects is deemed betrayal by his syndicate. Taylor then questions Eva-Marie about Leonard. She is thankful to Taylor, indeed, for his arranging her return to America and her debut in Hollywood without problem. This was done in spite of the fact that her family serves Mussolini. However, she knows very well that she does not love him. Leonard comes in while she is alone. As they talk together she feels attracted to him, finding Leonard just as sincere as before. However, she puts herself down, saying that she has changed into something like a mistress of Taylor's. Leonard assures her that she has not changed and he still loves her.

Frank tries to figure out why Antonio sent Leonard, and wonders if Antonio suspects his collusion with Gambino. When Frank has Gambino see McGovern to make a deal, Leonard comes in before them. Leonard is now sure that Frank has a hand in the dealing of cocaine, judging from the strange speech and behavior of Taylor's secretary. He is to execute Frank for his grave offense against the syndicate's rules. He challenges Frank to Russian roulette on the basis that the dead tell no tales, and spares Frank's life by using a revolver devised not to fire.

Eva-Marie slips out of the Taylor residence unnoticed and goes to a Nevadan desert with Leonard. Their car stops right in the middle of the desert, due to the overheating of the engine. As Leonard steps out of the car, he is inspired with new business opportunities and hits upon the idea to build a dream hotel dedicated to Eva-Marie. He asks her to choose a name for her future "castel".

Antonio yields at last to Leonard's enthusiasm, agreeing to the construction of a luxurious resort hotel in the desert. Eva-Marie leaves the Taylor residence and joins Leonard, who is working hard with his company on the hotel project. He proposes marriage to her upon completion of the hotel and asks her if she has decided on a name for it. She answers "Blue Bird".

Leonard sets about the preparative tasks to inaugurate the hotel, while Joe undertakes the publicity through the United News rivaling the papers of Taylor's Continental Press group. The United News writes that Leonard and his company are challenging to build a hotel in the desert in order to make their dream come true. Taylor feels humiliated. He decides to employ all his media to launch an extensive campaign against the opening of Leonard's hotel. His newspapers and radio stations start accusing Leonard of belonging to the underworld.

Eva-Marie makes up her mind to see Taylor. When she hints that she will return to him if he stops the campaign, Taylor tells her that he is not such a fool. However, he admires her determination to sacrifice herself. He immediately starts ordering all his newspapers and radio stations to stop the campaign and instead to present the hotel in a good light, when Duke and Duchess di Stephano come in with the news that Italy has been liberated. Then they tell Eva-Marie that her family has been arrested along with Mussolini. According to the duke, to save her family necessitates a huge sum of money, which only Leonard can prepare.

In the evening of the opening of Hotel Blue Bird, Joe announces that Eva-Marie and Leonard will be the first couple to have a bridal party at the hotel. Alarmed at the announcement, Antonio first warns Leonard against marrying Eva-Marie. Her brother exercised too severe a control over the Italian Mafia, which, now freed, is avenging and purging the Black Shirts including her brother. Then, he frankly pronounces that Leonard will have to pay with his life the price for marrying her against the will of the syndicate. Leonard asks the duke to rescue her brother. The duke replies that the Mafia's clemency should cost ten million dollars. Leonard makes up the sum out of the hotel's income from the inauguration show. He insists to Eva-Marie, who is hesitant to receive the money, that she should go to Italy as soon as possible with it. Then he gives her back the pendant of Minerva, wishing it to protect her during the trip.

Frank shows that the accounts of the hotel do not tally. Leonard lies that it because of the bad debts derived from the sales of sculptures the duke smuggled in. He admits that he is offended by the rules of the syndicate, and then proposes to Frank to forever settle the affair with Russian roulette. At the sixth turn, Leonard closes his eyes and pulls the trigger smiling. He looks around the hotel for the last time before falling down.

Eva-Marie goes alone to spread Leonard's ashes in the desert, the most suitable place for his long sleep.

Chapter 1: Prologue
The curtain rises with lively dancing music, when a universe of revue shows up with its modern metallic appearance based on white and gold. As Cosmostar S begins to dance, many other dancers dance as though they are reacting to Cosmostar S. Cosmostar A and Cosmogirls sing the theme song in relay. Cosmobeauty S sings accompanied by men. Then, Cosmosrar S and all other performers pompously inaugurate the revue.

Act 4: Dancing Spirit! A
Neon tubes of various colors are framed in black. Dancing Guys A show up to sing the pleasures of jazz dancing.

Act 6: Dancing Spirit! C
As the energetic dance of the men ends and the music changes, Dancing Ladies come up to dance in duet. The three Dancing Guys A sing together. All of them start dancing.

Act 7: Dancing Jewelry A
A lot of jewels are hanging like lanterns. The eerie figure of Thief S traveling in pursuit of jewels shows up from below the stage.

Act 8: Dancing Jewelry 8
Thief S and his band arrive at the palace where there are quite a few glittering jewels. The jewels charmingly dance to compete with one another in its beauty. The thieves come near the jewels they have been looking for.

Act 9 A: Dancing Jewelry C
In the mansion set with jewels, soldiers guard the jewels from the thieves. The thieves and soldiers fight in dance. The thieves beat the soldiers and take out the jewels.

Act 9 B: Dancing Jewelry D
The thieves and jewels unite, and dance and sing in duet.


Chapter 4: Dancing Rhythm
The rock dance begins in the Japanese atmosphere and develops into the European universe.

Acts 11 and 12: Dancing Rhythm B
As Man of Flame S comes up, the scene changes from black into flame-red, Man of Flame S dynamically rocks, and then the stars sing and dance with all the performers.

Act 15: Dancing Cats A
In the sewer, Rat S gaily plays, sings and dances with Rat Dancers. When they step into a new section of the sewer, they dance more vigorously than ever, without knowing that cats are in back of them.

Act 16: Dancing Cats B
The cats chuckle to themselves over their discovery of prey. The cats dance and sing with Cat S at their center. During the time Cat S is singing, other cats approach the rats, making them freeze. Then, as the cats thrust, the rats parry.

Act 17: Dancing Cats C
As the rhythm changes into a hard one, the scene transforms into the territory of cats under the night sky. The moment the cats almost catch the rats, the rats counterattack to the great surprise of the rats. The cats and rats dance to compete with each other in their strength. At last, the cats admit the strength of the rats and make friends with them. Cat S stands at the center of the cats and rats as a leader of both groups.

Act 19: Finale A
Chorus-member A lit by a pinpoint spotlight briefly dances in solo. Then, a precision dance starts with the Chorus-member A performing at the center.

Man of Finale A comes up from below the stage and sings. The grand staircase appears. Dancing women are replaced by energetically rocking men. Then, as the music changes, many couples gaily dance.


Chapter 9: Parade
All the performers pompously parade singing the theme song in relay.