Loading...
The Sun in the Last Days of the Shogunate / Dramatic 'S'! 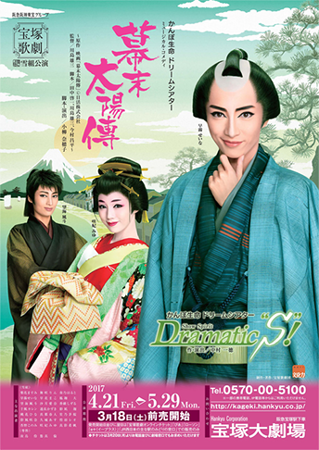 The Sun in the Last Days of the Shogunate:

† When Ayakaze Sakina was absent from the Takarazuka run due to illness from 04/21 - 04/25, Towaki Sea filled in as Tokusaburou while Agata Sen played Seishichi (Towaki's original role) and Hiyori Haruma played Genpei (Agata's original role).

The Sun in the Last Days of the Shogunate

The year is 1862, the twilight of the Tokugawa shogunate. Saheiji (Sagiri Seina), a townsman, indulges in an opulent revel with his friends at Sagami-ya, a renowned inn in Shinagawa, the first of the 53 Stations of the Tokaido. They eventually call it a night and his comrades leave the inn, with Saheiji staying behind. When courtesan Osome (Sakihi Miyu), after turning away the out-of-favor millionaire Mokubei (Natori Rei), finally comes to Saheiji’s room, Saheiji has her leave after a brief encounter. The next morning, Saheiji confesses that he is actually penniless and declares that he will work at Sagami-ya to pay for the bills. He convinces the owner Denbei (Souno Haruto) and his wife Otatsu (Rika Masumi) to let him “stay in” at Sagami-ya. Saheiji is in poor health, suffering from tuberculosis, and had the idea to spend some time in Shinagawa, a seaside location where he could enjoy good food. His plan to “stay in” at Sagami-ya had always been a part of his scheme.

Around the same time, in courtesan Koharu’s (Hoshino Anri) room, Shinsaku Takasugi (Nozomi Fuuto), Genzui Kusaka (Ayanagi Shou), and other exclusionist Choshu clan samurai were “staying in,” unable to pay. During their stay, Takasugi conceives of the idea to burn down the foreign residence under construction in Gotenyama.

Armed with his natural wit and grit, “Stay-in” Saheiji knowingly entangles himself in a great many of the interesting goings-on of the people in and around Sagamiya: Tokusaburo (Ayakaze Sakina), young head of Sagami-ya, who is about to be kicked out of the family, maid Ohisa (Maaya Kiho), who is pressured to be a courtesan to pay off her father’s debt, and Takasugi, who is pushing forward the plan of attack. Saheiji averts Koharu’s crisis that she brought upon herself with her double-dealing marriage oaths to both Buddhist altar maker Kurazou (Yuuma Rin) and his son, calms the waters after the huge fight between Koharu and Osome, fierce rivals for the title of marquee courtesan of Sagamiya, and untangles the web of troubles wound around Osome, who despairing from her lack of money, tries to take book-lender Kinzou (Houshou Dai) with her in a suicide pact. Having earned everyone’s trust, Saheiji goes out to the Kojin Festival, invited by Osome…