Loading...
When the Last Sword Is Drawn / Music Revolution!
READ THIS BEFORE EDITING THIS PAGE 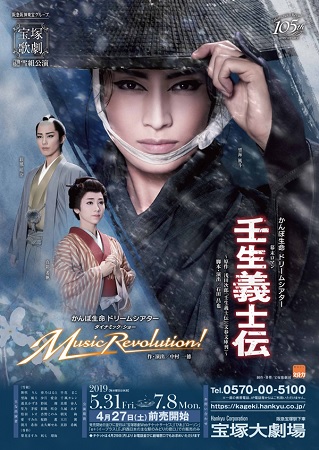 When the Last Sword Is Drawn:

When the Last Sword Is Drawn

It is a time of turmoil in the last days of Tokugawa shogunate... Yoshimura Kanichiro, a low-class warrior born the son of a foot soldier in the service of the Nambu clan, the lords of Morioka Domain in northern Japan, is a master of both the martial and scholarly ways, being greatly skilled in the Hokushin Itto-ryu school of swordsmanship, a brilliant scholar, a teacher of fencing, and a deputy instructor at the Nambu clan school. Kanichiro takes as his wife the young Shizu, who was raised in a village rich in beautiful nature and who is famed as one of the great beauties of the Nambu region, and even as he struggles against poverty, he strives every day to do his best for both his feudal lord and his family. But Kanichiro, knowing that a lowly foot soldier cannot protect his family no matter how skilled he is with a blade or a quill, makes up his mind to leave his domain and travel south. His goal is Kyoto, where warriors with skills, regardless of their rank or family name, can earn a handsome living as members of the “Shinsengumi,” the shogun’s secret police corps. Ono Jiroemon, Kanichiro’s childhood friend, attempts to dissuade him by explaining what a terrible crime it is to break away from the feudal domain to which one is bound. Jiroemon, just like Kanichiro, was originally born to a foot soldier family, but has been adopted by the Ono family and is now a high-ranking retainer—an otakachi—of Morioka Domain.

Then comes the day of Kanichiro’s departure. Jiroemon sends his servant Sasuke to hand Kanichiro a travel permit. If it is found out that Jiroemon helped a deserter acquire a travel permit, he could be found guilty of facilitating the crime. “I will definitely return alive ...” Kanichiro vows, as he, with a heavy heart, leaves his dear friend and his beloved family behind and sets out on his journey.

This seemingly calm and simple samurai joins the Shinsengumi and uses his noted skill with a blade to carry out dangerous missions and cut down many enemies of the shogunate, all to earn money for his family in Morioka. But the sands of time are shifting faster and faster. The emperor and his court take the side of the alliance of the Satsuma and Choshu domains, declaring the Tokugawa to be rebels and traitors. The Shinsengumi is defeated at the Battle of Toba–Fushimi, and its members are dispersed. Kanichiro suffers a grievous wound in the battle. “I have to get home ... I have to see my family ...” To obtain permission to go home, Kanichiro visits the Nambu consulate in Osaka, where he encounters a familiar face...

Beloved music born out of the lives of people all over the world—
Music has been a close companion and precious to us since ancient times, bringing us sparkling joy, happiness and hope.

There are diverse genres in music, such as jazz, rock, Latin, pop and classical. This show's theme is the evolution from the origin of music up until today through various genres, which will fascinate you with the dynamic beauty and greatness of music itself. The rich voices of top stars, Nozomi Fuuto and Maaya Kiho will move you in harmony with the snow troupe members in "Music Revolution!" This is a show you can't afford to miss!