Loading...
Valley of Xuanyao / Ray -Stellar Light-
READ THIS BEFORE EDITING THIS PAGE 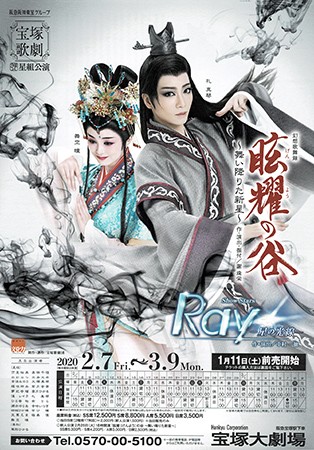 Due to COVID-19 concerns, the number of actresses on stage at a time has been reduced for the Tokyo run. The younger cast members will be split into two groups, "A days" and "B days".

A millennia ago, the Wen people lived in the beautiful, fertile land of Yali, where they built the statelet of Wen. In around 800 B.C.E., King Xuan of the Zhou dynasty engaged in battle with Ma Lan, leader of Wen, and invaded the smaller state. Yali came under Zhou rule, but in the Valley of Xuanyao, a sacred place associated with the Wen's deity, Liu Liliu, a few resistance fighters covertly continued the struggle against their would-be conquerors.

It is now spring. A young man who has been dispatched from Haojing, the Zhou capital, steps foot into Yali. He is an aristocrat by the name of Dan Lizhen. Upon beholding the land of Yali, he is instantly taken by its beauty and develops a burning desire to help the people who live here. General Guan Wu, who commands the garrison at the Zhou fortress in Yali, is a hero whose legend stems from his feats on the battlefield against the Wen. Dan Lizhen's mission is to find the Valley of Xuanyao, where forces hostile still against King Xuan remain in hiding, and to bring them under the yoke of Zhou.

General Guan Wu has stated that it is their duty to reach a peaceful settlement with the forces holed up in the valley and guide them onto the correct path. Dan Lizhen idolizes the general and vows to do everything in his power to carry out this duty, even if it means risking his own life.

However, they are utterly unable to locate the Valley of Xuanyao. One day, as night falls, Dan Lizhen is guided by a mysterious apparition and brought to meet a strange man deep in the forest. That man says that he wants Dan Lizhen to teach him the lullaby he had been humming. When Dan Lizhen does so, the man says he will lead him to the Valley of Xuanyao. Dan Lizhen is suspicious, but he goes along.
Then, a dazzling light appears all around, and it seems to Dan Lizhen as if he is viewing a heavenly spectacle. He is in awe of the deities he sees in this soul-shaking experience. But then, Dan Lizhen is suddenly attacked by some being and captured. When he finally regains consciousness, all around him are the Wen, who relocated to the valley after Ma Lan's defeat to protect the sacred land of Liu Liliu and their medicinal secrets. According to these people, King Xuan wants to take everything from them: the fertile land of Yali, the incredible medicinal techniques taught to the Wen, and the gold in the Valley of Xuanyao. Which side is telling the truth: General Guan Wu or the Wen?

As a captive in the valley, Dan Lizhen must ponder this matter alone. As he does so, Tong Hua, a blind woman from one of the Wen clans, comes to Dan Lizhen and offers a deal: she will release him from his bonds if he helps her to meet her son, who is in Zhou. This woman is in fact the younger sister of Ma Lan. Earlier in her life, she had been kept safe in a folk house in a village, where she became a dancer. During the village festival, General Guan Wu caught sight of her, and she later bore his illegitimate child. Upon learning this, everything that Dan Lizhen has believed up to this point all comes noisily crashing down around him.
Where is the truth, and what path must he tread? Bewildered, Dan Lizhen takes Tong Hua and sneaks her out of the Valley of Xuanyao.

"Rays can come in the form of light and heat. This show represents the beginning of another era for the Star troupe with the emergence of the troupe's top star, Makoto Rei, and a fresh start led by a new top pair comprising herself and Hitomi Maisora. Rei will be a ray, radiating light along with her shining Star troupe members as they sing and dance with fervor upon the stage. In this show, the gorgeous songs and choreography are all designed around themes of beauty and light."