Loading...
Too Short a Time to Fall in Love / Neo Dandyism! 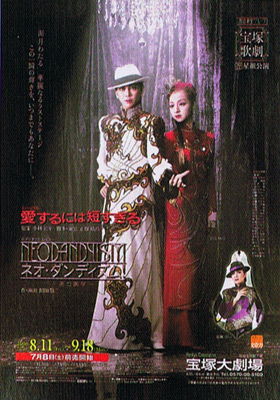 
Too Short a Time to Fall in Love:

Anthony becomes madder over Barbara and asks Fred not to stand in the way between Barbara and him, as Fred has his fiancée Nancy. As he listens to Anthony, he becomes conscious that he himself seriously loves Barbara. He wishes that he had met her well before his planned marriage to Nancy, and grieves over his misfortune. Barbara now sees Fred more than her simple childhood friend. They met again at the time when each was about to start a new life. They must now try to find the best solution within the limit of four days. The ship continues its journey along with the swaying feelings of Barbara and Fred.

The curtain rises. Many men wearing Chinese costumes are posing on the pitch black Grand Staircase. They begin dancing.

Welcomed by the men, Chinese Dragon in a pure-white Chinese costume appears and sings.

A tune reminiscent of the medieval prelude played on the harpsichord comes in hearing. A prologuist starts talking about dandyism.

A young man who looks like Casanova stands alone in a reception room walled with mirrors engraved with roses. He sings the theme song.

In front of the title setting of the revue, an English gentleman and four young gentlemen sing together about the dandyism.

Right in the middle of the pampas in Argentina flooded with the setting sun; Alfonso wearing a gaucho outfit is standing by himself. Silently, he starts dancing the tango.

Young guys sing while stylishly dancing You and the Night and the Music.

There is a huge staircase shaped like a pyramid. Gentleman of Carioca sings on its top.

(the scenes are inspired by the relationship between Jean Cocteau, a French poet of the early part of the 20th century, and his friends) A young man acting as leader (Polaris) and his friends dance and sing about their sorrowful parting.

The beautiful melody of All by Myself can be heard. A handsome young man comes out from behind a pillar on the Grand Staircase and sings. Four other young men join him and sing together.

A gorgeous Grand Parade rolls out in tune with the theme music.

(And all the other performers)