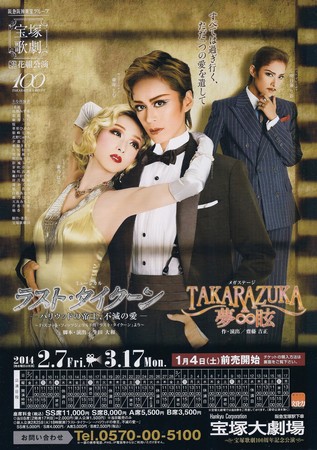 
†  Due to injury, Nanaki Kaoru was absent from the Grand Theater shinjin kouen and Sumizuki Naoto played the role of Eric.

The Love of the Last Tycoon is inspired by the life of film producer Irving Thalberg, on whom protagonist Monroe Stahr is based. The story follows Stahr's rise to power in Hollywood, and his conflicts with rival Pat Brady, a character based on studio head Louis B. Mayer.

The story is set in America in the 1930s. Monroe Stahr is a young and talented movie producer, known as the "Tycoon of Hollywood". He had earlier fallen in love with Mina Davis, whom he had discovered and was the heroine in one of his epic films. However, she was taken away from him by a sudden accident shortly after they had announced their marriage. While harboring this incurable wound to his heart, Monroe is fired by ever more passion to make movies for the masses, having discovered his path in life through his own encounters with movies while young. Yet this fervor toward his work leads to frequent clashes with staff members on the movie sets, to the point where he is criticized for being a dictator. Angered by their downtrodden position, the staff members initiate forming a labor union to gain their rights. Meanwhile, Pat Brady, a producer who groomed Monroe, is jealous of his talent, and he schemes to have Monroe shut out of the movie industry.

Commotion breaks out one day when fire starts on a movie set during a shoot. During the incident, Monroe spots a woman who appears to be a carbon copy of the late Mina, and he is instantly captivated. He soon manages to be â€œreunitedâ€ with this woman, called Kathleen, and in time he starts to love her for her true self, not as a replacement for Mina. Kathleen, nevertheless, feels she is merely Mina's surrogate. Although enchanted by Monroe, she lives in fear of being hurt. A breakup letter arrives from her announcing her plans of marrying her live-in boyfriend.

With the film hanging in the balance after the set's destruction by fire, Kathleen disappears, having been a reminder of Monroe falling in love again. As he struggles with the film's outcome and with the person he loves, will Monroe manage to profit again with one of his dreams, on which he has gambled his own life?

Numerous ~dazzling dreams~ are filled with wishes for our centenary, which has fulfilled ~boundless~possibilities. Gorgeous revues and shows,which have been cultivated by Takarazuka and are said to be our representative works, weave together contemporary senses and tastes. These works aspire to display the new style of revues and shows that will be staged beyond the 100th anniversary.