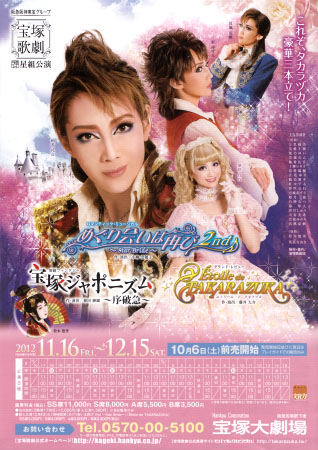 A sequel to the 2011 musical A Second Fortuitous Meeting, the story picks up one year later, on the eve of Dorante and Silvia's wedding. The village of Phosphor is gripped in a festive mood. At the residence of the feudal lord of the village, Silvia's father, Count Orgon, Dorante's attendant Bourguignon and others are preparing for some entertainment for the ceremony. On the day of the "Star Festival" of last year, Dorante, an aristocratic youth who took part in the "selection" as Silvia's groom held at the residence, was the man who had won her heart. The couple pledged their love for each other. Yet despite the way in which life's twists and turns have brought them together, the crabby Dorante and Silvia always end up quarreling recently whenever they come face to face. Klaus is a performer who is distraught over the disbanding of his theatrical troupe, a development that has left him in poverty with hardly enough to eat. After hearing a rumor about the couple by accident, he hits upon a clever plan aimed at resolving his problem.

That evening, a trivial matter once again sparks a confrontation between Dorante and Silvia, who are now feeling a twinge of discomfort over the marriage. Then suddenly, right in front of them, a knight appears, using the name of Silvia's fiancé, Klaus von Witterheim. Dorante can't control his shaking at the unexpected appearance of a rival. Not able to realize his true feelings, he feels compelled to let loose with some nasty words for Silvia. Bourguignon can't stand by and allow this behavior by Dorante, who loves Silvia but can't come to terms with it. The attendant enlists the assistance of the playwright Hermocrate to play a trick that involves everyone at the residence.

And so will the embittered couple, Dorante and Silvia, open to each other, expressing their true thoughts, and have a happy ending?