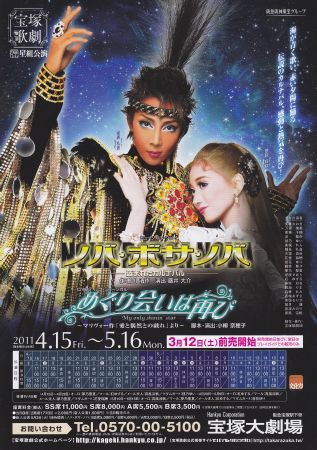 That night, everyone goes to the tango club. Ouro is sleazing up to Estrella, desperate to get his paws on her diamond necklace. He steals it without her noticing, then Sol tricks him into giving it up, and then Ouro's follower pulls a gun and takes it back. Sol takes a nasty knock over the head.

A tale from the fairly distant past. In the village of Phosphor on the day of the Star Festival, when once a year the "star in the center of the north" rises to its highest height, there was a legend that lovers who pray for love under the village's sacred tree of Yggdrasil will be happy for eternity.

One day in the early afternoon, Dorante Vespert, son of Duke Vespert, is traveling together with his attendant Bourguignon along a country road leading to Phosphor, a territory of the Count of Orgon. It has been decided to hold a contest to find a groom for the Count's daughter, Silvia, who is a great beauty according to the rumors circulating in the royal city. Dorante decides to visit the Orgon residence as a candidate. Count Orgon's family may rule a rural region, but it is still wealthy and owns vast amounts of land. On the other hand, Dorante's marriage to Silvia would secure the future of the Vespert family, which has status but little in the way of money. Dorante, however, is a bit of a misogynist who is skeptical on the idea of love and unhappy with the idea of being evaluated as a prospective groom. Bourguignon soothes his reluctant master. An itinerant troupe appears. They are making preparations to stage entertainment in celebration of today's Star Festival. But the group is in a quandary: a playwright has disappeared before finishing the essential conclusion to the script for their play. Dorante, a fan of the dramatic arts, asks what the performance is about. He is told it is the story of a prospective bride and bridegroom, both with a perverse sense of humor, who agree to disguise themselves as others so as to observe their respective partners. This gives Dorante an idea: that he and Bourguignon switch roles in an attempt to evaluate Silvia.

Around the same time, Silvia, the central figure in the contest to select a groom, reveals to her father her resistance to marriage. When Count Orgon asks why, her brother Mario explains that the reason is her broken heart. Silvia, however, expounds on her desire to marry only after determining the true nature of her partner, rather than being swayed by superficial attraction. Mario tells her that her idea is in parallel with the plot of a play written by one of his friends. This makes Silvia consider a plan to trade places with her attendant Lisette so that she can observe her prospective husband. Intrigued by her brother's remark, Silvia persuades her father to play along. And so, the two women switch roles.

Dorante and four prospective bridegrooms arrive one after another at the residence of Count Orgon. One is Lucidor, Royal Chevalier and Deputy Knight. He is participating in the selection in order to resolve a long but unproductive relationship with Countess Largo. Agis, the 24th prince in line to the minor Le Cain Kingdom, is disillusioned by his position as the last-born son of his impoverished realm. He is presenting himself as a prospective groom out of a desire for a glamorous life in a powerful realm. The other disingenuous participants include Fauchon, son of Lord Lowell. But this Fauchon is in fact Leonid, Fauchon's younger sister who is disguised as him. Leonid is madly in love with Silvia's older brother Mario. But she has been ordered to keep her distance from Mario after she had been following him obsessively. Keen to be by his side, she switches with Fauchon to become one of the suitors and manages to get inside the Orgon residence. A fifth person is Hermocrate, who is depressed over his lack of talent and ability and has been put forward in the contest by this father. A friend of Mario's, he is also the playwright whose whereabouts the traveling troupe is searching.

So we have Dorante, playing the attendant Bourguignon, and Silvia, who has similarly traded places with the servant Lisette. Their goals are unique, to determine their respective partners' true persona. What will be the fate of this grand play concocted by Dorante and Silvia? All of the actors and actresses are present, and the curtain rises on the "selection for a groom."