Loading...
Sherlock Holmes / Délicieux!
READ THIS BEFORE EDITING THIS PAGE 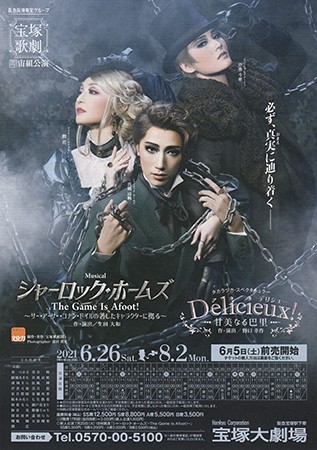 Musical
Sherlock Holmes
In the late 19th century, the city of London is shrouded in mist and smoke from the steam engines. The rapid industrialization has brought a population migration to the city, resulting in a dramatic increase of unidentified citizens who do not even know what their neighbors look like. Filled with unrest, London is a hotbed of various crimes. As the century draws to a close, people's daily lives are threatened by a serial killer, Jack the Ripper, who sends out death threats to newspapers, kills his targets, and disappears into the mists of time.

On the day that the fifth death treat is delivered to the newspaper, Inspector Lestrade of Scotland Yard visits a flat owned by Mrs. Hudson at 221B Baker Street to ask for help in solving the case. The flat tenant is Sherlock Holmes, a famous detective who has solved many difficult cases with his extraordinary insight, powers of observation, and masterful disguises. Holmes, who has already conducted his own investigation throughout the city by disguising himself as a vagrant, has come up with the bold conjecture that this series of murders is not the work of a single person but an organized crime. In order to prove it, Holmes deciphers the crime ring's code on a metal chain, and waits for "the game". His attempt, however, ends in failure. What he catches is just a courier, and there is no clue to the real criminal. Holmes still believes that he will eventually find the mastermind by following each clue he obtains, and he is determined to get to the bottom of this case.

Holmes's theory that Jack the Ripper is just a myth to deceive people's eyes is correct. Professor James Moriarty, a genius mathematician who runs London's underworld, manipulates everything. Moriarty is secretly commissioned by the leaders of the British government to dispose of targets, and make those murders look like the works of "Jack the Ripper". Moriarty has carried out four murders so far, but the appearance of Holmes puts Moriarty into a corner. Undaunted by such a situation, Moriarty is very interested in two things: the reason why the ministers are eager to find "the mistress who holds a state secret" as their fifth target; and Sherlock Holmes who stands in his way.

The arrest of "Jack the Ripper" misleads London citizens into believing that a series of murders has been solved, and consequently the city gets back to normal as if nothing happened. John H. Watson, who is Holmes's close friend, flatmate, and witness to his great works, is angered that the press gives credit for it to the police, not to Holmes. Holmes is more annoyed that the criminals do not make any moves. However, the silence is broken by a newspaper article saying that "the woman" has returned to London. She is Irene Adler, the unforgettable woman for Holmes… The woman, who was the key figure in a certain case three years ago, eluded Holmes's pursuit and suddenly disappeared. But now Irene, who is ostensibly an American-born opera singer, is performing in the Royal Opera House in London. Visiting her dressing room in the theater, Holmes sees a bouquet of flowers with a "M" tag on it. The game is afoot! The person the "M" stands for, Irene's connections, and her background… such factors help Holmes narrow down his search for the mastermind. The exceptional detective Sherlock Holmes's masterly deduction begins.

"Délicieux" is how the French say somethings tastes great.

This dazzling Paris revue is about the sweets that fascinate people all over the world. La Fleur, a beautiful but hungry young girl who is lost on the streets of Paris in the middle of the night, steps into an old pâtisserie, or pastry shop. She is greeted by sweet scents and Le Vent, a handsome young pâtissier. He invites La Fleur to roam together along the streets of Paris in the city's halcyon days, from the Belle Époque to Les Années Folles, in search of the ultimate sweets, and accompanied by enchanting music.

The Cosmos troupe, led by new top pair Makaze Suzuho and Jun Hana, present an enjoyable dream of a time that will be as sweet as a delicious pastry. This production at the Takarazuka Grand Theater will mark the stage debut for the 107th class of Takarasiennes.