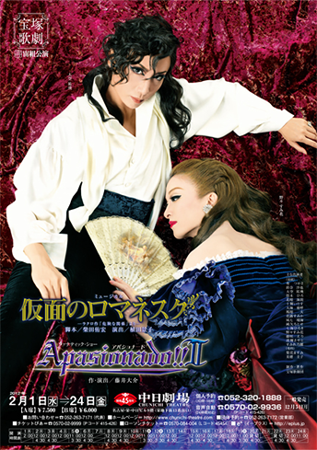 Paris, 1830. After the fall of Napoleon, Imperial Rule is restored by Charles X, younger brother of Louis XVI who was guillotined during the French Revolution. The aristocrats are somewhat fearful of the changing status quo, but nonetheless continue to live in luxury. In this social circle of truth and deception, much attention is gathered on one particular young noble, the Viscount Valmont. The Viscount family was ruined, but using his talent and charisma, he plans to make his house powerful once more.

Merteuil is vexed at Valmont's uncharacteristic lact of action, and thinks up a plan. She discloses to Cecile's mother, Mrs. Volanges, that Danceny has attempted to seduce Cecile, and suggests she let Cecile go to the Rosemonde residence where Valmont is staying. Valmont is to lay the cloth for an easy seduction by acting as mediator between Danceny and Cecile, and approaches the naïve Cecile who falls easily into his hands. Danceny, who knows nothing of the situation, gladly accepts an invitation from Valmont to visit the Rosemonde residence. Cecile is still in love with him, and is infinitely ashamed of her actions.

On the Eve: Tranquilo
Scene 1
Queen Reina of Ice, Hielo the Ice and other Ices wake up in the world covered with ice.


The First Night: Pasión
Scenes 2 and 3
Gradus, wearing a huge coat and at the scarlet grand staircase, serenely sings expressing his inner passion.


The Second Night: Veneno
Scene 5
Apasionado, all alone, sings a ballad as if he were trying to cool himself down.


The Fourth Night: Tropicos Noches
Tropical flowers vie with each other in beauty and a carnival begins.


The Sixth Night: Quente Amor
Scenes 18 and 19
Saddened by the death of Honrado, Lágrima (Tear Spirit) Man S and Woman S sing. Many Lágrimas dance calmly at the beginning and gradually add strength to the dance.


Scene 23B
Amante appears to return to her beloved Apasionado. As Guapo sings, they dance in a pledge of their eternal love.


Scene 24
All the performers parade to the theme song.