Loading...
Princess Kuroaza and the Charcoal Maker / Let Me Die In Your Arms 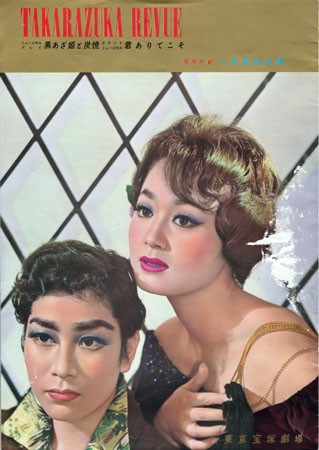 Princess Kuroaza and the Charcoal Maker:


Let Me Die In Your Arms:

Once upon a time there lived in Kyoto a court noble named Nijo Tameiye, whose daughter, though exceedingly lovely and tender in the heart had one physical defect — she had a black mole under an eye. Because of this, the princess was nicknamed Princess "Black Mole" and young courtiers used to turn away from her.

Even lowly men would not wish to wed her, which greatly grieved both her father and mother, named Kinguase. She was also grieved to see her parents in such a plight, and made up her mind to look for a husband by herself. With such a desire in mind, she ventured to confine herself in the Kiyomizu-dera Temple to pray to God for help.

On the day the prescribed period of her prayers was schedule to end, the Kwannon, Goddess of Mercy, showed up in front of her saying "Know ye that at a place called Narukoyama in the distant province of Kii far in the south (Which is now Wakayama Prefecture) there lives a young maned named Kogoro, who is destined to become your husband. With him you will surely be happy through your life." With this the Goddess disappeared.

Seen off by her weeping parents, the Princess departed on her long and precarious journey, all alone. Before she left, Tameiye, her father, handed her a bag containing three gold blocks, saying "With this, you and your young man will be able to live through life in plenty and happiness."

At the end of her long journey, the Princess at last found herself at Narukoyama, here, as ordained by the Godess, she met Kogoro, who, to her dismay turned out to be a black faced man, living among monkeys deep in the mountains. In spite of this, she tried to be obedient to what the Goddess had directed and was determined to become his wide. Wonderful it was that the young man appeared to be utterly indifferent to the black mole on her face, which made her extremely relieved and happy.

Kogoro, the simple young man, on his part found himself deeply attracted by the lovely Princess and immediately set about preparing for the nuptials. As he left on a hunting mission in order to hunt game to be eaten in celebration of their wedding, the Princess handed him the bag containing the valuable gold.

As she sat there alone after Kogoro had gone out, she saw a vision of the far distant Miyako, or Kyoto — in the vision Kogoro was a charming young Prince and on her face there was no black mole any more, turning her into a matchlessly beautiful woman.

In his hunting adventure, Kogoro was unlucky and was unable to shoot even a bird. With all his arrows on his shoulders used up, he happened to come up to the shores of a lonely pond, where he caught sight of a duck. Alas he had no arrows available. He then though for the bag handed by the Princess. He unhesitatingly threw the three gold blocks at the duck, as if they were simple stones, and thus could catch it. Happy and glad, he hurried back to his hut where he was astounded to find the girl lying on the floor in a swoon.

In no time the Princess came back to her senses and proposed to Kogoro a plan to go up to the Miyako and build up a life of plenty and happiness with the three gold blocks as capital. When she was told that the gold had been thrown into the pond for killing the duck, she was plunged into despair and cried.

Seeing her in such grief the young man desperately implored her that she remain there with him. Moved at the sincerity and affection shown by him, she eventually gave up the idea of ever going back to Kyoto and instead made up her mind to live there, deep in the mountains, until the very end of her life, because she was conscious that thus only she could be assured of a true happiness.

Bradley, the clergyman, comes upon a woman on a pasture on the foot of the Andes in South America. She was none else than Lana, missing since a year ago, together with Joe Mason, his close friend.

Answering the questions posed by Bradley, Lana relates her sorrowful experience form a year ago as follows:

British Consul Jeoffrey Mason decided on the expulsion from Havana of Rosita, a waitress at a bar on the ground that she had beguiled many English travelers coming to the island. She was to be deported to a Caribbean island.

Rosita had an elder brother named Galoi, who was a hoodlum devoted to gambling. He would practice frauds by making a pawn of Rosita.

Ademar, the father, was despairing of his son, Galoi, and had a desire to live a quiet life with his daughter, Rosita. And Lana was Galoi's paramour.

On the even of her expulsion, Joe, a son of the Consul, visited her bar, in company with his friend, Bradley. Galoi swindled money out of Joe, while he, at first sight, fell in love with her. He promised to persuade his father about his love of her.

Uninformed of the situation, the Consul could not be expected to acquit her. In despair, Joe made up his mind so abandon Charlotte, his fiancee, and sneak out of the island together with Rosita, Galoi arranged so that Joe, Rosita, Ademar, Lana, and he himself escape out to Haiti.

Days of bliss and happiness on Haiti for a short while, for Lana came to love Joe. Their love, however, was destined to turn into those of agony and privation.

Galoi wrote a letter to the Consul asking for a large sum of money in return for his effort to have Joe and Rosita separated from each other. He also demanded that their offense in escaping from Havana be left unquestioned. He informed him about where they could be located.

Soon, Joe was escorted back to Havana, by his parents and Charlotte his fiancee.

Two years elapsed, Joe was a clergyman. On a certain day, he accidentally came upon Rosita who was now earning her living as a prostitute. Joe was just on the eve of departure to England in order to be wed to Charlotte. His unexpected reunion with Rosita, however, shook his determination.

Galoi, still addicted to gambling, interfered and demanded that Joe did not stand in Rosita's way, while Rosita, on her part implored that Joe overlooked her, as she swindled a big money out of an English tourist called Hamilton, who happened to come upon the scene.

Hamilton soon discovered about the fraud, and pointed a pistol against Joe and Rosita. On the contrary, however, Hamilton was shot dead by Rosita with a pistol which she concealed on her person.

Unwittingly turned into murderers, Joe, Rosita, Galoi, and Lana, avoiding the searching eyes of La Taille, the detective, sailed across the sea and hid themselves deep in the mountains in South America. Ademar, however, was arrested.

On their way to the self imposed exile, Joe repeatedly tried to surrender himself to the police. Resenting this, Galoi attempted to kill him but shot Rosita by mistake, instead, while he, on his part, was stabbed to death by Joe.

While La Taille, the detective was looking for them, Rosita was already dead in Joe's arms.