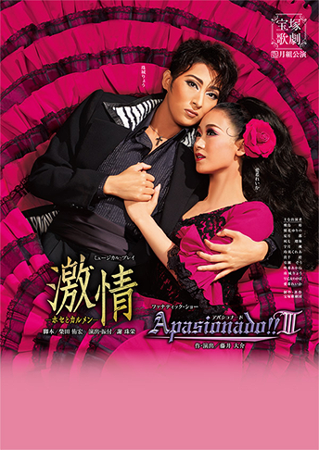 
(1) As of 03/24, Takachi Ao will be absent from the performance until further notice. Yuu Hikaru will take up her role as Juanito.

Passion - José and Carmen
Based on motifs in Mérimée's original work "Carmen," Don José is destined to be at the mercy of Carmen. His attraction to her passion is portrayed in this musical work. It premiered in 1999 starring Shizuki Asato and Hanafusi Mari of Cosmos Troupe and won the Excellence Award in the theatre department at the 54th Annual Agency for Cultural Affairs Arts Festival. In 2010, the work was revived by Star Troupe led by Yuzuki Reon and Yumesaki Nene on a well-received National Tour. This time, select Moon Troupe members will step up to the plate.


Apasionado!! III
Apasionado in Spanish means "hot" or "the passion of man." To the theme of "heat," its various forms are incorporated into this revue, such as in hot rhythms, heated emotions, burning love, and the flames of jealousy. People will gamble their lives in the name of passion. It was performed by Moon Troupe in 2008, led by Sena Jun and in 2009 by Oozora Yuuhi of Cosmos Troupe. A staged piece overflowing with adult atmosphere, a brush-up will be delivered.