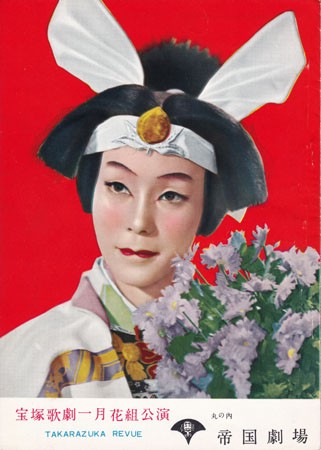 Once upon a time there lived in a certain place an old man and his wife..... One day the old woman goes to a nearby river to wash clothes and finds big and small peaches floating. She immediately picks up the biggest peach and brings it home. When the couple cut the peach into two, a plump baby jumps out from it. The baby christened Momotarou grows up to become a manly youth.

Bidding farewell to his foster parents and villagers who come out to see him off, Momotarou leaves for Devils Island in the best of spirit.

In the meantime, Sankichi, a herd of monkeys are celebrating the good harvest of the year on Mt. Sarutobi in the Land of Monkeys. Sambei, Sankichi's friend, says: "A youth by the name of Momotarou is going to stamp out the devils on Devils Island." Then Sankichi makes up his mind to become a subject of Momotarou although he does not know where the youth is.

Yuujirou, a pheasant, is going to join Momotarou's expedition to Devils Island too.

In a certain hamlet, the villagers make it a rule to offer annually a human sacrifice to a certain "god" living in a nearby eerie pond by order of the latter and this year, too, a beautiful girl is chosen as victim.

Traveling to meet Momotarou, Pochimaru, a dog, arriving at the woods the procession also reaches to a small old shrine. Accosted by him, the villagers flee in great surprise and the girl also follows the villagers. Some invisible creatures then come out of the darkness and Pochimaru is bitterly beaten, put in the box and carried away by them.

The box is brought to the mansion of the King of Kappa at the bottom of the pond. (Kappa, a fabulous amphibian, is a water imp according to a Japanese legend.) The king finds out it is a dog when he opens the box. The king in anger intends to kill Pochimaru by using his witchcraft. But at the critical moment, the king is thrown down with a loud noise by Pochimaru.

Pochimaru and Yuujirou meet Momotarou and become the latter's subordinates. And Sankichi also joins the party. Momotarou rejoices at his getting three subordinates, a dog which sets store by humanity and justice, a pheasant which has valor, and a monkey's wisdom.

Nyanko, a cat and the spy of the King of Devils Island, comes to know about the Momotarou expedition and devises a stratagem to hamper the coming Momoarou's attack against the island.

Making use of Echo as a tool, Nyanko lets the dog and monkey drop behind Momotarou. After the pheasant goes back to search for them, Echo calls the Fairies of Sleep to order them to make Momotarou fall asleep.

One-thousand-year-old serpent which is living in the basin of a certain waterfall takes the shape of Hanako, Momotarou's friend, and tried to here. But Momotarou, getting back on his feet, recalls his mission and gets ready to set out. After severe fighting, Momotarou defeats the serpent and its followers.

Momotarou and his party reach the Land of Beauties. By Queen Senhime of this country and her glamorous girls, the three subordinates of Momotarou's are enchanted. But Momotarou appears and warns them that the beauties there really are skeletons.

But Momotarou's party arrives at Devils Island. He orders the monkey and pheasant to reconnoiter the enemy. King Devil is holding a spree when Momotarou and his subordinates raid the room and fight the devils.

After a fierce fight, Momotarou at last subjugates the king.

And Momotarou and his party return to the village in triumph, being greeted by the foster parents, Hanako, Sankichi's wife with a baby who had born to Sankichi following his departure, and Kijiko, Yuujirou's sweetheart.