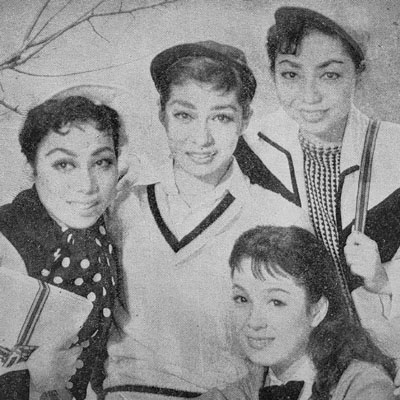 Tommy is the son of a poor family and a student of high school third year class, yet his seriousness made him chairman of the class meeting. He is an idol of the girl students and respected as their ideal man.

Having been jealous of his reputation, Joe, one of his classmates, plans to give some Jack-in-the-boxes to their teacher, Mr. Chilton and puts the responsibility of their prank upon Tommy.

Tommy is subjected to reprimand as Joe has expected, but his girl classmates including Peggie, a millionaire’s daughter have compassion on him. Then Joe schemes to put him to shame and waits for the opportunity.

When Peggie goes to see Tommy to a drive-in where he works in his spare hours, she finds Sara, a classmate of hers, talking very intimately with him. She is agitated. Understanding whole story, Joe snatches the opportunity and persuades her with his sweet words to go for a drive. When they come up on a hill, he kisses her by force.

First kiss -- There broken-hearted Peggie weeps night away with vexation.

As soon as the day breaks, she is found out by the searching party organized by her parents, teachers and classmates. They misunderstand Tommy as the seducer because of her slip of the tongue when they are told her story.

Tommy is dismissed from his position, and Joe, even the real seducer becomes the chairman.

Few days after, a Baseball Match is held between the new and old chairman’s party. In the midst of the game, a sad news is brought to Tommy saying that his father who has been sick in be falls into a critical condition.

When he is told that his father has to undergo an operation at the hospital, he is at a loss what to do for its expense.

Knowing his circumstances, Sara, attracted by Tommy, attempts to steal some money from Peggie’s home in order to win his favour. She, the safe-cracker, puts the key into a boy’s pocket when she runs away. So the boy, Cab by name, falls into suspicion.

Naturally, Cab persists in claiming his innocence, but the New Chairman Joe tries to lynch him on the railroad.

Hearing of this information, Tommy runs to the place and stops the rushing train. Cab is saved, but Tommy holds himself responsible for interruption of running train. He is referred to the disciplinary committee, and expelled from school.

Leaving from school with his broken heart he sees Peggie waiting for him. She tells him her true heart.

Being much surprised to the result, Sara confesses that she committed safe-braking, and Joe, on the other hand, apologizes to the school-master for his wrong ---- Tommy is freed from his accusation and readmitted into school.

There can be seen everybody singing the praises of their youth.

This is a story in a badger’s country.

On the festival day of this country, it is the custom with people to celebrate their weddings. This year, the young lord Tanukichiro of the Mangetsu Castle and the princess Kinuta of Nadeshiko Castle are to be married. The show goes on from the eve of the festival.