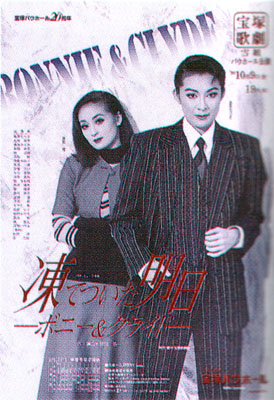 Dallas, Texas in 1930. Clyde Barrow and his young friend Jeremy Methvin are relaxing between â€œjobsâ€ when policeman Ted Hinton drops by. Clyde and Ted knew each other as boys, but theyâ€™ve since gone down very different paths. When Ted implies that Clyde is up to no good, and heâ€™ll be keeping an eye on him, Clyde returns that he has nothing to hide. Just then, Clydeâ€™s older sister Nell arrives, just returned to Dallas after her recent divorce. As Ted leaves, he tells his associate Bob that he remembers Clyde was a good kid, just drawn to the wrong crowd. Ted ponders the appeal of the gang life Clyde and Jeremy eagerly immerse themselves in.

Meanwhile, Bonnie is unhappy working at a restaurant, where her bossâ€™s attentions are very unwelcome. Jeremy arrives to visit Bonnie, who is uninterested in him â€“ unlike her young co-worker Billie, who pursues Jeremy energetically. Bonnie quietly wishes that her estranged husband Roy would somehow save her, though the two havenâ€™t met in 4 years. Clyde happens to come by the restaurant, and Bonnie is amused but unconvinced by his bragging about being a â€œbad guyâ€ and carrying a gun.

Clyde is also having love troubles. His girlfriend Alice announces that after speaking with her parents, sheâ€™s decided to get marriedâ€¦ to someone else. When he suggests that instead the two run away together, she admits, â€œI love you, but Iâ€™m afraid of you. I love you, but I canâ€™t be with you.â€

There is one happy pair of lovers: Raymond Hamilton and his girl Mary. Raymond has come to town to meet up with Clyde for some â€œworkâ€ and heâ€™s an equally quick draw with a gun and a camera.

Meanwhile, Billie tries to convince Jeremy to give up his life of crime, but he still finds it fun and romantic. Clyde visits his family, talking with his sister and mother, both of whom are worried about his criminal lifestyle. When Clyde tries to placate Nell by telling her that he still hasnâ€™t killed anyone, sheâ€™s so upset that she slaps him across the face. In an imaginary conversation, Clyde speaks to his elder brother, who he idolizes.

While Clyde and his friends plan a bank heist, Bonnie visits her mother. The two discuss how hard times are, but when her mother asks about Roy, Bonnie cuts her off, declaring sheâ€™s through with him. As Bonnie ponders the fact that she never knew her father (who died when she was young), she realizes that it may be at the root of her problems with Roy.

Ted and Bob join the guards at the bank. During the robbery, Clyde shoots a guard, and Ted stops his escape at gunpoint. Clyde acts unconcerned, eventually confusing Ted with talk of the old days long enough to escape. Once clear of the crime scene, Clyde basks in the pleasure of being able to take whatever he wants. But a meeting with Alice shows how his new life is taking him impossibly far away from those who love him.

Clyde meets Jeremy and Raymond, who have the money from the heist. When Raymond asks Jeremy about Clydeâ€™s beloved brother, we learn that heâ€™s currently in jail. Ted and Bob drop by the restaurant, but when Jeremy arrives, they recognize him immediately from the robbery and take off after him. Bonnie has one incident too many with her boss and walks out.

Running into Clyde in town, she laughs when he tells her heâ€™s just robbed a bank and is hiding from the police. Even when he declares heâ€™s just killed a man, she finds it hard to believe. â€œDo you do that often?â€ â€œOccasionally. When I want something. Or want to give a present to someone.â€ To prove his point, he robs a nearby store at gunpoint. After he and Bonnie escape, he gives her her present: a few pieces of candy. When he explains heâ€™s a member of a gang of thieves, Bonnie is intrigued. The two kiss. Clyde says heâ€™ll take her anywhere she wants to go, and Bonnie â€“ whoâ€™s been aching to escape her dreary life â€“ agrees. The two take a car from a garage, picking up a new driver for their gang at the same: a young boy named Jones. Back at Clydeâ€™s familyâ€™s house, Ted and Bob are inquiring after Clyde. Nell and Mrs. Parker are shocked to hear of Clydeâ€™s actions.

Bonnie and Clyde go by Bonnieâ€™s house to get her things. Bonnieâ€™s mother is horrified that her daughter is running away with a strange man. As the two argue, Ted discovers Clyde and captures him. Bonnie visits Clyde in jail. He asks her to bring him a gun from Jeremy, so that he can escape. â€œIâ€™m with you,â€ Bonnie tells him.

Jeremy agrees to give Bonnie the gun, but asks her, â€œDo you know what this means?â€ â€œYes,â€ she tells him, â€œWeâ€™ll go off in the jalopy. To a place where we can live the way we want.â€

The gang has been formed, but their journey is just beginning.

The Barrow Gang robs a bank, but wins over their victims with their humor and generous nature. Still, theyâ€™re now hunted men and women, driving towards an uncertain future. Ted and Bob will now be assisted in their hunt by FBI agent Frank Hamer â€“ seems Hoover has taken an interest, and intends to have every member of the Barrow Gang executed.

Bonnie & Clyde ponder their relationships â€“ both with each other and the loves theyâ€™ve left behind. Bonnie wants to see her mother, so the gang goes back to Dallas. Ted is still trying to reach Clyde through his family, who will tell him nothing. He gives Nell a gun in case she has trouble.

The families are reunited â€“ and more. Clydeâ€™s brother is out of prison and has a new wife, Blanche, a very proper woman who thinks being a wife is the best job there could be â€“ an opinion that doesnâ€™t endear her to Bonnie. Bonnieâ€™s mother begins fussing at Clyde. Sheâ€™s upset about their dangerous lifestyle and wants him to marry Bonnie and give her a proper life, complete with white picket fence. Bonnie is very upset by her meddling.

When the pair have a moment alone, Clyde suggests they do get married, but Bonnie declares sheâ€™s happy the way things are. She doesnâ€™t answer when he asks her if he loves her. Clyde holds another imaginary conversation with his brother, admitting that what he wishes for is someone whoâ€™ll stay beside him. Bonnie admits that, though she didnâ€™t intend to, she now loves Clyde. Nell has made a wedding bouquet for Clyde to give Bonnie. He tells his sister that he may not be able to see her again. He offers the bouquet to Bonnie but she throws it away: The two understand each other.

Frank wonders why it is that Ted is having such a hard time catching the Barrow Gang, strongly implying that Tedâ€™s personal feelings are getting in the way. When they approach Billie, she claims not to have heard from Jeremy â€“ who is in fact hiding in the other room. The policemanâ€™s threats have shaken her though, and she begs Jeremy to finally reform.
The gang has disagreements about their future plans â€“ Raymond and Mary want to go to Florida, but Jeremy scoffs at this idea. Everyone is very aware that they canâ€™t go on much longer, but donâ€™t realize that at that very moment the police are surrounding the house. Bonnie and Clyde talk, and Clyde tells Bonnie he wants to love her. But Bonnie feels that he has someone else in his heart, even though she loves him. They are interrupted by police gunfire, and though the gang escapes, Bonnie is injured.

Things go downhill fast: Jones is captured, and promptly betrays the gang. He claims they forced him into helping them, even as he admits to himself that he didnâ€™t hate them. Mary is captured too, and her words are like bullets in Raymondâ€™s heart: He was the bad one, and his promises of Florida nothing but lies. The rest of the gang is still free, but out of cash and wondering how it came to this. Bonnie and Clyde send Jeremy away, telling him heâ€™s not ready for whatâ€™s coming. Jeremy is shocked and, feeling hurt and abandoned, returns to Billie. Bonnie and Clyde rob a bank, but the jokeâ€™s on them: the bank is closed and thereâ€™s nothing to be had but some candy from the tellerâ€™s pocket. Bonnie and Clydeâ€™s families prepare for them not to come back alive.

Jeremy confides in Billie, telling her that Bonnie and Clyde are resting up near his fatherâ€™s place in Louisiana. He plans to rejoin them shortly, and Billie asks him to take her with him, but he tells her no. The police arrive and Jeremy is captured, when Frank announces Jeremy will be sent to the electric chair, Billie panics and protests that heâ€™d promised her Jeremy wouldnâ€™t be executed. Jeremy is horrified by her betrayal, but when they threaten to arrest Billie too, and offer him a deal, he feels he has no choice but to agree. He wonâ€™t get the death penalty, in return for selling out Bonnie and Clyde. â€œI would have gone to the end with you,â€ he declares sadly.

Bonnie and Clyde are enjoying their rest in Louisiana. Jeremy meets them there as planned, and tells them he canâ€™t understand how they can keep smiling and laughing with everything thatâ€™s happened. Bonnie tells him itâ€™s because theyâ€™re both fools. They tell him not to worry: they have their road, and he has his. The pair wish him well, and go off on their way.

Bonnie and Clyde are killed in a police shoot-out. In death, Clyde finally finds the words to tell Bonnie he loves her too.

It was performed again by Snow Troupe in 2008, with Ouki Kaname and Aihara Mika / Ootsuki Sayu in the lead roles.