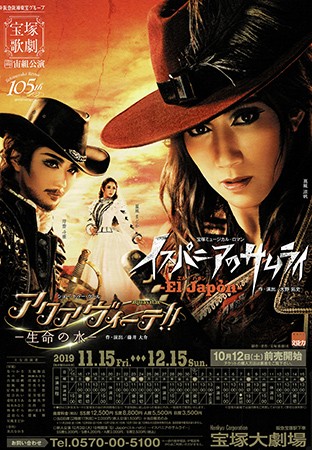 Takarazuka Musical Romance
El Japón -The Samurai of España-
In the town of Coria del Río in southern Spain, there are people who use the surname “Japón” to identify themselves as descendants of the samurai. What gave birth to this curious legend of Japanese samurai in a far-off land...? This lighthearted and pleasurable tale of heroism has as its protagonist a retainer of Sendai Domain, dispatched to Europe on a diplomatic mission, starkly portraying the emotions of the samurai and an encounter with another culture.

In the 18th year of Keicho (1613) the Keicho Embassy to Europe was dispatched from Sendai Domain in northern Japan. The genius swordsman Kamata Harumichi was among their number. After about a year at sea, the mission reaches its destination of Spain (España), but their negotiations with King Philip III are frustrated, and they wind up passing away uneventful days in the tiny village of Coria del Río on the outskirts of the port city of Seville. One day, Harumichi rescues a young Japanese girl who had run away after being enslaved and sold to a plantation, and when looking for a place to hide her he encounters an innkeeper named Catalina. Despite the sinful desire of the nearby plantation owner, Catalina never yields, her dignified appearance bringing to Harumichi’s mind the woman he had once loved. Their mission complete, the diplomats are due to return to Japan, but as his ship prepares to leave port Harumichi catches wind of news that Catalina has been abducted...


SHOW TOO COOL
Aqua Vitae!! -The Water of Life-
A show built upon the theme of that most aromatic and mature of deep-flavored spirits: whiskey. Experience the many varied talents of the stylish and cool Makaze Suzuho and the other members of Cosmos Troupe, in a performance based on unique whiskey.