Loading...
The Yagyu Ninja Scrolls / More Dandyism!
READ THIS BEFORE EDITING THIS PAGE 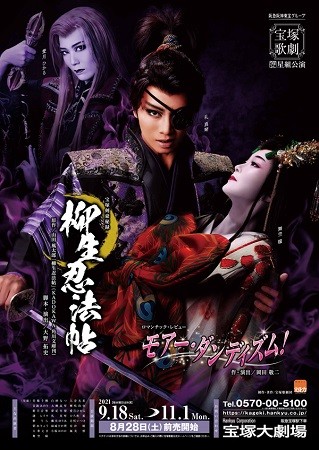 Futaro Yamada’s novel “The Yagyu Ninja Scrolls” is a historical epic that masterfully weaves fiction into fact: Takarazuka will take on the challenge of adapting this work for the stage for the very first time.

It is the Kan’ei era of Japanese history (1624–1644). Kato Akinari, the daimyo of Aizu, keeps his domain under tyrannical rule. After his chief retainer, Hori Mondo, gives up on him and flees the fief, the Hori family faces imminent reprisals from Akinari. Dissatisfied with the idea of simply punishing Mondo, Akinari marches with his men to the Tokeiji, where the women of the Hori clan seek shelter. Here, he plans to capture the Hori women by force. However, the shogunate recognizes the Tokeiji as an “enkiridera,” or a place of refuge for women who seek release from marriage. The patron of the temple is Tenjuin, who is also known as Sen-hime, wife to the late Toyotomi Hideyori. Tenjuin has been controlled by men all her life, so she will not allow such a fate to befall the temple that serves as the last bastion of hope for many abused women. Thoroughly convinced that vengeance must be delivered by a woman’s hand, Tenjuin secretly invites a martial artist to instruct the Hori women, who have set their hearts on seeking revenge. This man is Yagyu Jubei, the one-eyed master swordsman: although he is the heir to the shogunal family’s swordsmanship instructor, he dislikes working in a castle, and instead spends all his time polishing his own fighting skills. Entrusted with the Hori women, Jubei makes his way to Aizu domain while fighting through multiple enemies. Waiting for them in Aizu is the mysterious Ashina Dohaku, who has gained control over the domain. He has his daughter Yura, who is also Akinari’s concubine, by his side. Will Jubei and the others be successful in defeating their evil foes together?

The “Dandyism” series explores a theme eternal to Takarazuka: the aesthetics of the otokoyaku. “More Dandyism!” is the third in this lineup, following in the footsteps of the original “Dandyism!” that was performed in 1995, headlined by Flower Troupe top star Maya Miki. “Neo Dandyism!” revisited the topic in 2006, with the ((Kozuki Wataru)-led Star Troupe.

Immerse yourself in this classic Takarazuka revue, abundant with both glitter and grace! The colorful and romantic atmosphere of the show will accentuate the charm of the current top star, Rei Makoto, while also showcasing the energetic charm of the troupe members.