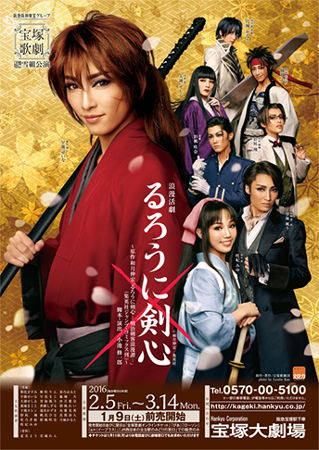 † When Ayanagi Shou was absent from the Takarazuka run due to illness from 02/11 - 02/16, Mana Haruto filled in as Takeda Kanryuu while Shinjou Makara played the newspaper seller and Houka Haruna played Shikijou, both of which were Mana Haruto's roles.

†† When Arisa Hitomi was absent from the Takarazuka run due to illness from 02/15 - 02/20, Haori Yuuka took up her role as Sekihara Tae, manager at "Akabeko" restaurant.

††† Due to injury, Shiose Kazami was announced out of the Takarazuka shinjinkouen on 02/22 and Kujou Asu who plays Hyottoko in the honkouen, filled in.

The original "Kenshin the Wanderer: The Romantic Story of a Meiji Swordsman" is a comic by Nobuhiro Watsuki. Since April 1994, when the story's serialization in weekly comic magazine Shukan Shonen Jump began, "Kenshin" has been a major commercial success. The comic has sold over 59 million books and produced hit animated features and live-action films. Today, "Kenshin" has legions of fans of all ages.

Now the Takarazuka Revue is creating the story's first incarnation as a musical, with a script and direction by Shuichiro Koike.

Our story begins in Kyoto, in the closing days of the Tokugawa Shogunate. Himura Kenshin, a swordsman from Choshu Domain aiding the cause to restore Imperial rule, fought on the front lines to topple the shogunate and inaugurate a new era. A master of the Hiten Mitsurugi school of sword fighting, he battled the Shinsengumi special police and other foes defending the old order. With his savage swordsmanship Kenshin cut down innumerable enemies, earning him the nickname Hitokiri Battosai.

By the end of the war, Edo Castle's gates were opened without bloodshed and the shogunate fell. Ten years into the Meiji Era, Tokyo is undergoing rapid change in the name of cultural enlightenment. Kenshin is now a "rurouni," an endlessly wandering swordsman who has taken a "korosazu" vow to never kill again.

Suddenly, word gets around about a swordsman known as Himura Battosai of the Kamiya Kasshin school. Kamiya Kaoru is the assistant instructor at the Kamiya Kasshin dojo. She suddenly attacks Kenshin, as she believes this man, sword on his hip yet knowing nothing about the legendary sword Sakabato, is the so-called Battosai tarnishing her school's name. Soon, though, she realizes it is all a misunderstanding.Another man searching for Battosai is Saito Hajime, also known as Fujita Goro. He is a former captain of the Shinsengumi's third unit and now a lieutenant with the police. The so-called "Battosai" is a hoodlum who was once in the employ of Takeda Kanryu, a young businessman. Kanryu has his sights set on the property where the Kamiya Kasshin dojo stands. He eventually schemes to tarnish the school's honor and sends his henchman to steal the land. However, Kenshin is at the dojo to block the way. Hearing about the disturbance, Saito rushes over and meets Kenshin, whom he has not seen since the shogunate's fall 11 years earlier.

Meanwhile, Kano Sozaburo, a former Shinsengumi soldier who was expelled from the force, is reminded of his life over a decade ago when he hears about Battosai's re-emergence. Kano now trades goods between Japan and France and has a new name, Gerard Yamashita. He comes up with a plan to unseat the Meiji regime by using a new type of opium manufactured by Takani Megumi, a female physician Kanryu holds captive. Kano intends to obtain the opium from Kanryu in exchange for troops brought over from France, but Megumi escapes her confinement. On the run, she happens upon Kenshin and begs him for his help. He hides her in Kaoru's dojo. Kanryu, meanwhile, is frantic and hires Shinomori Aoshi, a famed master spy who once guarded the inner gardens of Edo Castle, to find Megumi.

It is around this time that Saito has sniffed out the plan to conquer Japan with opium and is seeking the people behind it. He asks Kenshin, who is staying at Kaoru's dojo, to aid the police in exchange for a high position in the army. Kenshin, however, declines, since he has vowed to never take another life. As he confronts his past as a butcher of men, Kenshin dearly wishes for the power to create a happy world for everyone in his life without relying on the strength of the sword. Yet under these circumstances, his heart heads in the opposite direction...