Loading...
The Poem of Love and Revolution / Mr. Swing! 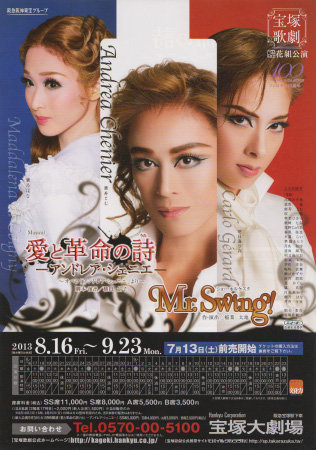 
The Poem of Love and Revolution:


(1) Will not be performing in Mr.Swing! (both runs) and Andre Chenier (Tokyo run, from 10/31). Haruhana Kirara will take her role since then.

The Poem of Love and Revolution

This is the story of a poet who lived at the time of the French Revolution.

The poet's name was Andrea Chénier. He lived and died amongst love and bloodshed. The numerous words of truth spun by this revolutionary poet became poems for eternity. Even today, they continue to shine light on the hopes that rest in people's hearts.

It is July 14, 1789, and a shadow is cast over the feudal system that has continued for hundreds of years. France, racked by political instability, is on the eve of a revolution. The masses, disgruntled and angered at their unreasonable treatment at the hands of the aristocracy, rise up to the point of igniting. The aristocracy, who make no attempt to come to terms with the social unrest, continue to defend their way of life, as it has always been. An extravagant evening party is about to unfold at the estate of Count Coigny on the outskirts of Paris. The servants of the house busily go about their work, preparing for the feast. One of them, Carlo Gérard, develops a growing sense of dissatisfaction toward this inequitable society that discriminates against him based on his social status. He admires the idea of egalitarianism among the people, as espoused by Rousseau. Meanwhile, he is secretly in love with the Count's daughter, Maddalena de Coigny. She is inflicted with a sense of emptiness from being made up daily like a dress-up doll, and she waits impatiently for the day when true love comes calling. At that time, the guests arrive one after another and start to mingle, and Andrea Chénier appears at the estate. He may write poetry that is harshly critical of aristocratic society, but he is also a recognized poet, and in reality he is ashamed to be mixing with the people at the estate. He wishes for the day when he can live his life with a spirit that is free to wander. Andrea, Maddalena and Gérard have each been placed in different circumstances. Yet that evening, the three, who each harbor the hope for freedom of the human spirit, will come face to face with each other, on the occurrence of a huge historical event that will announce the death of the feudal system. This will be known as the French Revolution, which will begin with the occupation by the masses of the Bastille prison. Andrea's idealism and sense of mission are on fire at the beginning of this struggle to create an egalitarian society, while Gérard lines up to join the revolution, weapon in hand. Furthermore, the revolution forces the young woman Maddalena into the life of a wanderer.

The tidal wave of the times, when everyone believes that the ideal kind of society has arrived, will in time move in the wrong direction. Ironically, Andrea and Maddalena will be joined together by a thing called love. Idealism, which has been pushed to the forefront of reality, is toying with Gérard's life. Before long, a raging torrent that provides an omen of the tragedy to come will overwhelm all three of them.

Cool and passionate to the extreme. The rhythm emerges with dynamic movement, as the stage heats up, hotter and hotter. This is Mr. Swing! Ranju Tomu, now on the crest of a wave, opens the show together with the Flower Troupe, which is filled to the brim with individuality, as the "orquesta" (orchestra) plays fast and furiously.