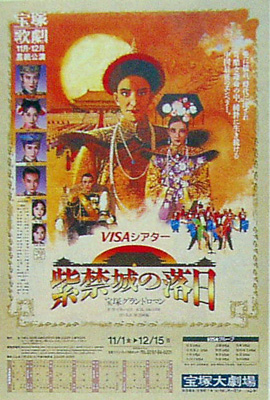 A dramatic and large scale production about the troubled life of Emperor Fugi (Puyi in English), last emperor of the Qing Dynasty. The story revolves around Fugi and his empress, Enyou, and Fugi's younger brother Fuketsu and his Japanese wife Hiro.

(from official booklet)
For three centuries the Manchurian Qing dynasty ruled all China. In 1911 the Xinhai Revolution toppled the Qing Empire and established the Republic of China. The kindness of Yuan Shikai, a revolutionary but a close friend of the Empress Dowager, Longyu, permitted the Imperial Court to survive intact within the confines of the Forbidden Palace (Shikinjou).
The Xinhai Revolution forced the abdication of the six-year old Emperor, Puyi, who had been on the throne for three years. Even though his Empire had disappeared, Puyi was raised in Imperial splendour and he desired to rule again. In 1922 Puyi married two women according to custom the First Empress, Wanrong, and the Second Empress, Wenxiu. Wanrong was a beautiful woman who had been given a modern, liberal education. The restrictions of court life were a burden to her and she couldn't tolerate the existence of a rival. Wenxiu detested Wanrong as much. She had been selected as a First Empress, but the Empress Dowager wanted her own niece, Wanrong, to reign as First Empress.
Puyi's younger brother, Pujie, studied military science in Japan and married a Japanese aristocrat, Hiro, the daughter of count Saga. Pujie returned to China with his bride but Puyi was enraged that his brother had flouted the marriage conventions by marrying outside of the Manchu race.
When the protector of the Imperial Court died, General Feng led an attack on the Forbidden Palace. The National Chinese Army demanded that the Emperor leave the Palace at once. Just then the Lieutenant General of the Japanese Kwantung Army Yoshioka Yasunao intervened and invited Puyi and his family to come with him to Manchuria. Puyi accepted the Japanese military's plan for him to reign over the Manchurian Empire.
Since Puyi was Manchurian he readily agreed to the offer of a new throne and the accession ceremonies were held at Changchun in Manchuria in 1934. Puyi finally had an Empire to reign over even though he was a figure-head ruler for General Yoshioka and Japanese government. Pujie, his wife Hiro and Wanrong were critical of the Emperor's relationship with the Japanese Army. Wanrong had turned to opium to forget her troubles.
In 1941 the Pacific War started. Although in the early stages the war was in Japan's favour it later seemed inevitable that Japan would be defeated. Even so Japan continued to fight after Germany and Italy had been defeated in Europe.
On August 9, 1945 the USSR declared was on Japan and invaded Manchuria. Yoshioka ordered that the capital had to be moved to Tonghua. Puyi asked Wanrong to come with him. Wanrong realized that due to her opium addiction she would only be a burden to the Emperor. Shw flew into a rage to make Puyi so disgusted that he would leave her behind. Puyi saw through the pretense and realized that the Empress truly loved him. But sadly he understood that it really was best to leave her behind in Changchun.
On August 15, Captain Kuraishi, a secret envoy from the Japanese Imperial Court, arrived with a plan to help Puyi and his family escape to safety in Japan. However, two days later the Soviet Army was closing on Tonghua...