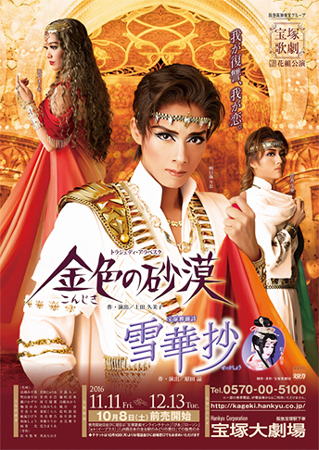 “Japanese natural aesthetics” — with the theme of Japanese elegance, a magnificent picture scroll presented in dance that unfolds gracefully. Starting with the glorious scenery of spring, then the glittering waves of summer, the autumn moon, and then from a pure silver world of dancing snowflakes to an ode to the riotously blooming cheery blossoms, the dazzling scenes build up one after another. The Japanese time-honored legends are woven together with modern essence and arranged in the Takarazuka style into an ambitious nihonmono revue, splendidly extolling the beauty and allure of the four seasons.

In the ancient desert kingdom of Esfaan, King Jahangir invites suitors of his three princesses to a grand party. Giy, the slave boy of Crown Princess Talharmine, has mixed feelings upon seeing Theodoros, a prince from another land, pursue Talharmine’s hand in marriage.

Along with Ger, the slave of the king’s second daughter Princess Virmaya, and Puri, the slave of the king’s third daughter Princess Sharaddha, Giy has worked in the palace, waiting on Talharmine since he was young. Yet he is unhappy with his life. While Pipi, the slave of Queen Amu Darya, tries to reason with the proud Giy, he holds romantic feelings for the beautiful yet out-of-reach Talharmine. On the other hand, Talharmine, due to her pride as a princess, realizes but is unable to accept that she needs him, and adopts a cold attitude in their interactions.

Talharmine accepts her suitor Theodoros’ marriage proposal. The night before the wedding Giy risks his life to approach her, and Talharmine yields to his passion in spite of herself. With her pride as a princess shattered, she is prepared to throw away her status and run away with him. Giy promises that after escaping the kingdom he’ll show her the gold sands of the desert, which Talharmine has been enamored with since she was a young girl. However, as they approach the palace walls, soldiers confront them and the situation takes an unanticipated turn...

Giy harbors a strong desire for revenge. It boils over, forming a tall vortex in the blazing desert, shaking people’s fortunes...