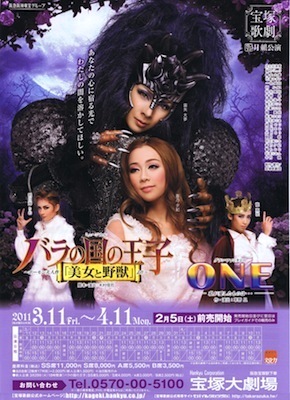 Show Information
English Title: Prince of the Land of Roses / ONE -The One I Love...-
Japanese Title: バラの国の王子­ / ONE - 私が愛した物は...-
Romanized Title: Bara no Kuni no Ouji / ONE -Watashi ga Aishita Mono wa...'

Prince of the Land of Roses:

Prince of the Land of Roses

The setting is a kingdom where roses bloom. The King, a Queen with a noble spirit and the Prince lead a quiet life marked by admiration and appreciation of roses. One day marks the end to their days of peace and quiet. The King is transformed into a tyrant through a magical spell by the Queen's sister. The King loses interest in his once-tranquil existence and falls under the woman's spell, becoming addicted to extravagance and gambling. The King banishes the Queen and summons her sister to take her place. The King and the Queen's sister eventually give birth to a prince. A short time later, the King passes away. Eager that her own son becomes the new King, the woman uses her magic to turn the first-born Prince into a wild beast. The spell will be broken on the day he encounters a woman who is not bothered by outside appearances and is capable of seeing through to the truth. Until that day arrives, the Prince is fated to spend each day in a state of despair together, along with his vassals, one whom has been transformed by magic into a tiger, the other a monkey.

Time ticks by, the kingdom is ruled by the son of the Queen's sister. A wealthy merchant in the town has three daughters. The youngest daughter Belle is a beauty of good character, compared with her selfish and fun-loving sisters. She is a wise girl who loves reading books. Previously, having heard of Belle's beauty, the King had visited the merchant's home while accompanied by his vassal, Henri. He had apparently wanted Belle to join his household and become a Queen. However, she declined the offer, as she would have found it impossible to marry, which would mean leaving her father behind at home.

The merchant ends up failing in his business and losing his fortune. But then comes news that one of his ships has called at port and is laden with goods. The two sisters are overjoyed by the prospect of reverting to a life of luxury. As their father prepares to visit port, they ask him for some expensive gifts, such as shoes and necklaces. Belle, however, makes only one request: a single rose. The merchant visits the port. Yet his journey is futile. A court has seized his goods, so he remains penniless. While heading home with haste and a heavy heart, he becomes lost in an eerie forest at night. A storm is raging. Just at the point where hunger and cold are about to take their toll, his eyes seize upon light coming from a house. The merchant enters the house to discover that a meal and bed are laid out, providing him with a narrow escape from death.

After the merchant wakes up the following morning, he is captivated by the splendid sight of roses in bloom in the garden of the house. Not having been able to afford a single rose, he can now at least return home with one for Belle. He plucks a single flower. At that moment, the roar of thunder is heard, and the owner of the house appears. It is the Beast. For the indiscretion of trying to steal a rose, the Beast tells the merchant to hand over one of his daughters to his household as compensation. He then sends the merchant on his way. Hearing this news, Belle is determined to go to the home of the Beast in place of her father.

Meanwhile, the Beast doesn't think for a minute that one of the daughters would come to his house in exchange for her father. But when he learns that the merchant has returned accompanied by a daughter, he shakes violently. The vassals who had been turned into a tiger and a monkey advise the Beast to meet Belle. However, he fears Belle will be repulsed by his unpleasant appearance, and he finds himself unable to appear before her.

Perhaps the thing that illuminates the darkness of the Beast's loneliness is the light residing in Belle's soul. Now, the story of love between a kind and gentle beast who adores roses and young woman possessing a pure heart is about to begin.

The origin of things, just a single thing, just a single person - This is a fantasy show that is knit together by brilliant and enjoyable scenes on the theme of "One," a word of many meanings.


S4~6 The One I Love (I) ~ One Silver Dollar ~ In One
Countryman: Ryuu Masaki
Countryman: Asumi Rio


S20 The One I Love (IV) Singer
Singer: Ryuu Masaki